Pixite’s fantastic Tangent app gets a big update with v1.5, adding in a new “Urban Decay” pack that lets you point your iPhone camera at a building and have it crumble into rubble and dust, and then snap pictures as zombies and wild animals reclaim what us evil humans were only ever borrowing.

Wait, no. Urban Decay is a new set of fancy filters for grungifying your pictures. Just make sure you get the right Tangent app, as the developer has been plagued by a copycat who keeps putting fake versions of the app up on the store.

First, Tangent. Pixite makes some of my favorite iOS Apps, from Flickring to Unbound to, well, Tangent. The app adds geometric patterns to your iPhone photos, as well as letting you add textures and other filters. It’s a unique look, and the new Urban Decay filters make it even better.

Now, the fakes. Pixite has been battling with another developer who keeps uploading rip-offs of Tangent, and taking money for them. Currently the fake is called Tangen, by developer Veronica Juc. Apple has been informed, but even if it forces the developer to pull the app, he/she can (and is) just creating a new account and doing it again.

In this case the copy is pretty obvious, as the original Tangent comes from a well-known and respected Mac and iOS developer, but I’m sure there are plenty of apps in the store which are just as fake but not so easy to spot. 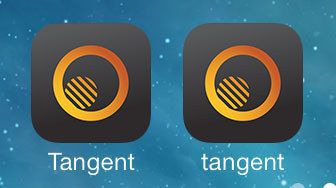 I do wonder, though, what Apple can do about this. All it takes it $100 to register a new dev account, and surely it’s pretty easy to recoup that on even a $1 app. And, as I said to Pixite’s Ben Guerrette on Twitter, what if the faker puts in a complaint to get the original app pulled? Clearly Apple has to put in the hours to investigate every single complaint.

If you want the real Tangent app, then you can find it at the link below. It’s