Hiding in Apple’s slick birthday tribute to the Mac is the most common of desktop creatures — a Microsoft mouse. The out-of-place peripheral shows up in a new video that highlights the Mac’s amazing impact on the world, and it sticks out like a sore thumb.

The mouse, used by composer Hans Zimmer, appears several times in the 30th-anniversary video -— but it is most obvious at 1 minute, 47 seconds in. If you look closely at the screenshots above and below, you’ll see it’s quite obviously a white Microsoft wheel mouse. 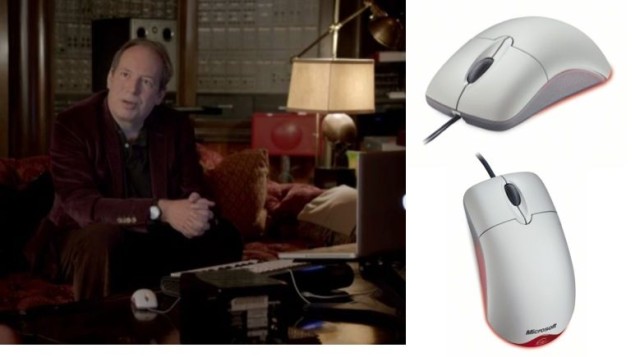 Apple’s normally pretty careful about making sure other products don’t appear in its promotional videos, but who’s going to tell Zimmer —- whose production credits include movies like The Lion King, Inception and Driving Miss Daisy — that he needs to use a different mouse while Apple’s cameras are in his studio?

A lot of Mac users end up picking up a third-party mouse. Apple’s own Magic Mouse gets criticized a lot for its design, reliability and hefty price tag. Some say it’s uncomfortable to use, power-hungry and nowhere near as accurate as cheaper alternatives.

If you haven’t already watched the Mac’s 30th-anniversary video, I urge you to do so as soon as you get a spare three minutes. It gives an incredible insight into how the Mac is helping all sorts of professionals from all kinds of industries make their dent in the universe. And like a lot of Apple videos, it’s beautifully well-made, even if it does include a questionable cameo.