Most musicians I know are struggling to buy a new set of guitar strings, let alone a new iPad Air. But if you are a music-making, iPad-toting, live-gig-playing musician, then you might be interested in IK Multimedia’s new iKlip 2, and the accompanying iPad Adapter. 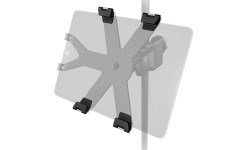 The iKlip is a thermoplastic clamp and mount which attaches to a mic stand and turns it into an iPad stand. The attachment can be made to horizontal booms or vertical poles, and the ball joint makes precise positioning easy.

Never before has it been so easy to not ever learn the words to your songs – now you can just get a karaoke-like prompt for your own songs. FACT: I went to a gig in here in Leipzig, just before Christmas, and the band invited a guest singer up for a few songs. They were playing covers, and the guest singer was totally (And shamelessly) pulling up the lyrics on her iPhone before each song.

And of course, you can also use the iKlip 2 to secure your iPad for use as a musical instrument, or as an effects board for your guitar, using IK Multimedia’s own iRig adapters to do it.