UPDATE: My apologies, this story is incorrect. I followed up with Buffalo Technologies, who now say Apple had only an advisory role in the inclusion of Firewire. The decision was not an Apple mandate, and not all portable drives sold in the Apple Store have Firewire as well as USB, as readers have noted. In an email, Buffalo’s Brian Verenkoff says:

“Apple never insisted we do anything, nor can they force any company to do something they don’t want to. Obviously given the nature of this product, we designed it for the iPod/iPhone user base and did have ongoing dialog with Apple to make sure we developed a product that was compatible with their store and their customers. At the end of the day, every decision was made by Buffalo as to the product features.”

LAS VEGAS – Here’s something I bet you didn’t know. Every portable hard drive sold in Apple’s retail stores must include a Firewire port.

I found this out while getting a demo of Buffalo Technology’s Dualie, a combination iPhone/iPod dock and 500-Gbyte dockable hard drive. 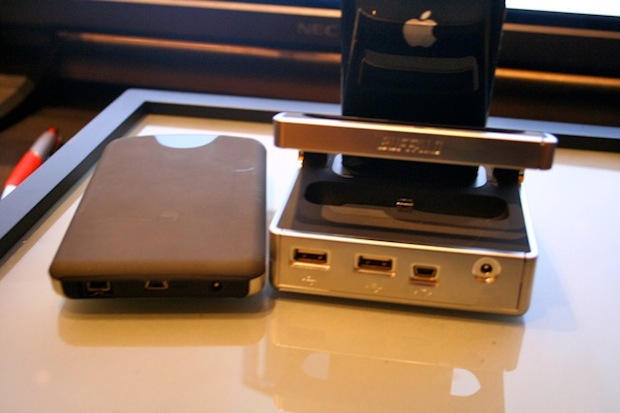 The dock/drive is designed to reduce desktop clutter. Everything is connected to your Mac with a single USB cable, including the dock, hard drive and anything attached to it via USB.

“It’s a one-stop shop for you,” said Brian Verenkoff, Buffalo’s director of business development. “It’s one USB connection and I have all my peripherals connected. There’s Time Machine backup and an iPhone dock for charging and syncing.”

But pop the portable hard drive out of its dock, and it has both USB and Firewire 800 connectors. That’s odd, because the drive connects to its dock by USB. Why add the extra Firewire port? It seems redundant.

“Apple made us put the FireWire 800 on the drive,” explained Verenkoff. “Every drive in the Apple Store has USB and FireWire. Check it out yourself.”

Why Apple insisted on the extra port, Verenkoff didn’t know.

A prize to the first person to provide an explanation.