The fourth-generation iPad with its dual-core A6X processor was certainly no slouch, but it looks like one when you put it up against the new iPad Air. Thanks to that new 64-bit A7 chip, the iPad Air is an incredible 80% faster than its predecessor in Geekbench tests, and over five times than the iPad 2 (which is only $100 cheaper). 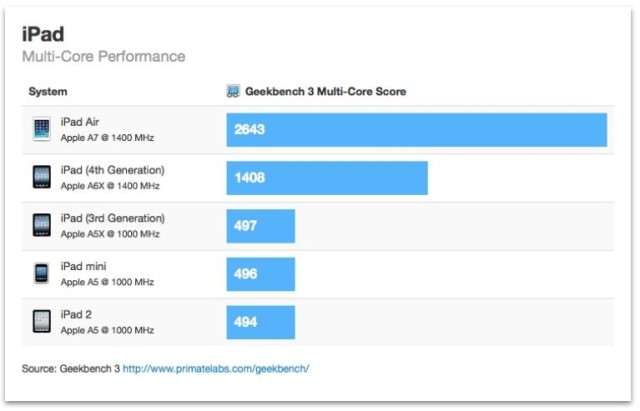 And again, it’s not that the fourth-generation iPad is slow — as you can see from the chart above, it’s still significantly faster then the third-generation iPad and the original iPad mini. It’s just that the iPad Air’s A7 chip is just that much better than the 32-bit A-series chips.

The Geekbench results show that the iPad Air’s processor is clocked at 1.4GHz, which is 100MHz faster than the iPhone 5s’s A7 processor. It’s thought that both chips are identical, but Apple may allow the iPad’s to run slightly faster because of its bigger battery.

These results make Apple’s decision to keep the iPad 2 — and indeed price it at $399 — all the more puzzling. It’s immensely slower than the newer models, it has no Retina display, and yet it’s only $100 cheaper than the iPad Air, and the same price as the Retina iPad mini — which also has an A7 processor.

Who is going to walk into an Apple store and buy an iPad 2?