Dictionaries, dusty tomes full of words. Books that are pointless now we can just tap a word and define it in-place. Who’d buy a dictionary app in 2013? Me. And you, probably, once you’ve seen what Terminology 3 has to offer.

Terminology is Greg “Drafts” Pierce’s dictionary app, which used to distinguish itself by enabling round-trip look-ups from compatible apps. It was great, but I stopped using it after a while as the system dictionary was good enough, and a lot of the time I would have to head to Google anyway after all local searches turned up empty. 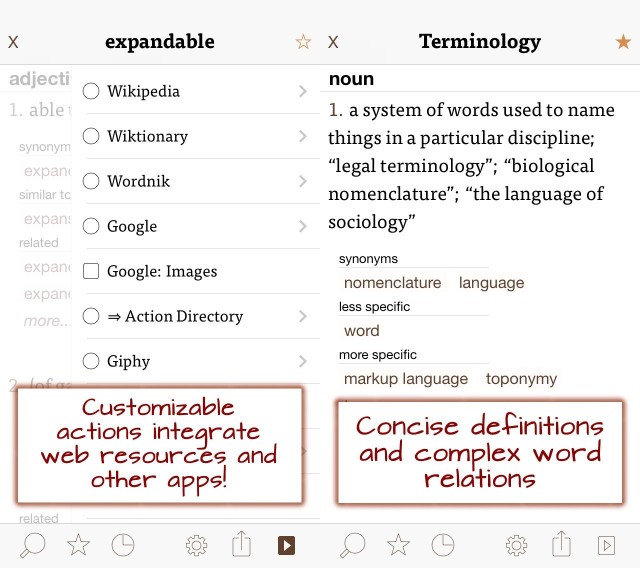 T3, as I shall call it here for obviously nerdsome [1] reasons, adds in the same kind of inter-app openness that makes Drafts so great. In addition to the full offline U.S. English dictionary, with the ability to favorite words, access your browsing history and iCloud sync, you can also add your own services to the app.

There are a bunch of built-in actions, allowing you to quickly check words in Wikipedia, Google and so on, plus a whole directory at the Agile Tortoise site which lets you add custom actions to the app. My favorite is Urban Dictionary, because of my filthy sense of humor.

You can also send definitions direct to local apps on your device: Day One, Evernote and –yes – Drafts. And because the app also accepts incoming words and phrases via URL scheme, you can also perform lookups from other apps. I have a Drafts action just for this, because if I want to do something with words, then Drafts is where I always start.

The T3 is a brand new Universal app which will cost you $3. I’m glad to see that Greg has chosen not to go for free upgrades from previous versions of the app (which will of course keep working if you already have it).