The Bitizens are back, and this time, it’s all about trains! Who doesn’t like trains?

Fresh off their hit Snake re-imagining Nimble Quest, NimbleBit has turned in a lovely little game that looks and plays a lot like last year’s hit Pocket Planes, with retro pixel art style and transit-themed, schedule-based gameplay. There’s a lot to like in this new iteration, as well, including streamlined mechanics, refined strategies, and updated graphics. 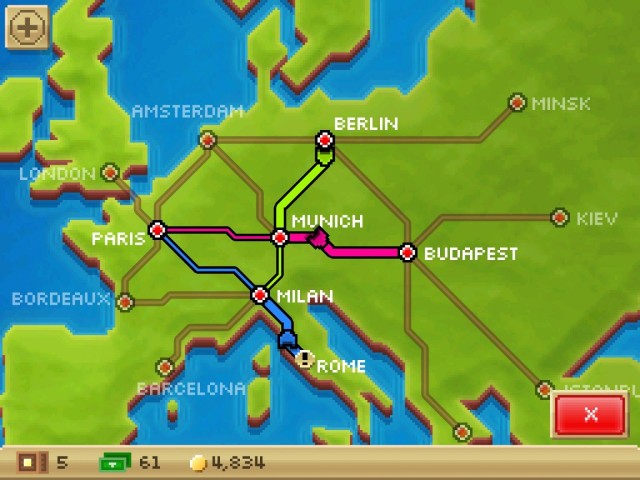 Pocket Trains starts out with a couple of trains and a few routes that offer jobs. The map is set in Europe, with stations at major cities like Munich, Berlin, Paris, Rome, and the like. Each train has a certain fuel capacity, speed, and cargo limit, which players will need to take into consideration when sending them along the tracks.

That matters less than it did in Pocket Planes, however, and there’s a welcome relief in not having to match the number of cargo cars or passengers to each train. It’s much easier to know when any specific train is full, as well, with great visual cues. Everything makes good sense in the user interface, too, with reminder text popping up whenever I forgot to tap on a destination, for example.

Trains must be assigned their own routes, which makes things even more interesting. If my Bluebell Steamer, for example, owns the route between Paris, Milan, and Rome, then my Cherry Steamer cannot use that route, unless I purchase it for in-game currency, thereby kicking my original engine off the route. It makes for some fun strategic gameplay, especially as new routes are opened and owned. 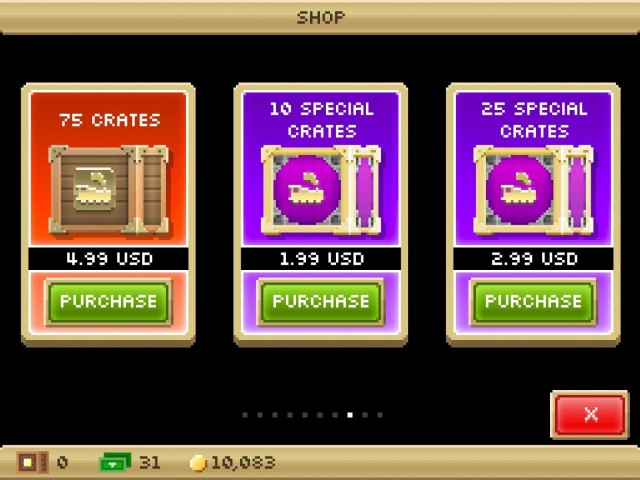 Trains can be crafted from parts that are rewarded in the form of crates, themselves costing green dollars to open. These green dollars–as well as regular and special crates–can also be purchased in-app, but they’re also awarded each time players level up. It’s a fair, gentle free-to-play strategy, and one that NimbleBit has seemingly mastered. More free-to-play games should adopt this style of business.

The only niggling issues I encountered were occasional mis-taps on destination cities, and a bit of difficulty trying to tap on stuff on the smaller iPhone screen. Speaking of, the iCloud sync between my iPad and iPhone was seamless and just worked. Fantastic stuff. The constant notifications can be a bit of an annoyance, as well, but they’re easily ignored, to be honest.

In the final call, Pocket Trains is a charming, unique, somehow relaxing take on a strategic time-management game that really doesn’t have an analogue in the App Store. It’s a great addition to the NimbleBit stable of Bitizen-themed games, joining classics Pocket Planes and Tiny Tower.