After releasing on Android this past July, Battle Dragons from Spacetime Games has been doing pretty well, but interested iOS gamers have been out of luck.

Today that changes, as the free-to-play build and battle game comes to iPhone, iPad and iPod touch in the App store. It does look quite a bit like Clash of Clans, another highly successful free-to-play game from Supercell, but Gary Gattis, CEO of Spacetime Games, says that may just be an artifact of the trailer.

Gattis told us that the Spacetime Games team drew inspiration from Clash of Clans, sure, but also Galaxy Life, Candy Crush, and Backyard Monsters as well. “It’s more of an interactive toy box than a set up and run game like the others,” he said.

The team spent a lot of effort and time on tuning the sound of the game, for example, with each action and event sound tuned to mesh with all the others, “like a fully interactive beatbox to play with,” said Gattis.

You’ll command an army of Dragons and send them off to plunder valuable resources (that can also be purchased in the Battle Dragons store, of course), and use those to become more powerful. You’ll build, battle, and visit your friends’ Fortresses, giving them important boosts while you’re there, like speeding up their building construction and boosting Gold and Sheep (wha?) production. Oh, your dragons eat sheep. Just sayin’.

There’s over 43 different building types to add to your Dragon Fortress, 13 defensive structures to protect your town while you’re away battling with 10 different kinds of Dragon units which can of course be upgraded along the way.

Create a Dragon Tribe (or clan, if you must) and fight against other tribes to compete on the social leader boards. Battle Dragons connects to Game Center as well as Facebook and Twitter, so you can brag to all your already connected friends. 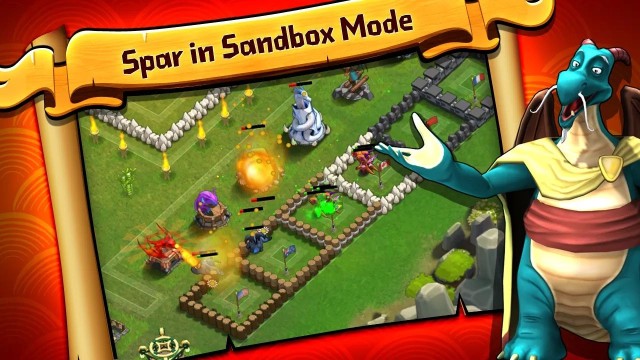 One unique feature is the interactive sandbox mode, where you can test your own defenses out against your own offense. “It’s a good way to test defense and offense strategies in a penalty-free environment,” said Gattis. “The hope is that this will make learning the game super fast, too.”

It’s a big switch from Spacetime’s previous MMO-heavy offerings, like Pocket, Arcane, and Star Legends, but Gattis is excited to try something new, plus he didn’t want to compete with those games, as they continue to be successful with a loyal following. Arcane Legends alone gets about 150,000 daily average users, said Gattis.

Battle Dragons is now available for free on the App Store, as well as Google Play.