This is pretty awesome: How do you fancy having a proper, optically-zooming lens on your iPhone? That’s what the Sony ‘Lens Camera’ will do for you. These leaked shots show one version of the new device, which is actually an entire camera that lacks a screen and controls. These are provided by your iPhone (or Android phone). 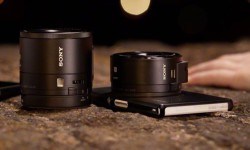 The Lens Cameras will clip onto the front of your iPhone and communicate via Wi-Fi. A companion app will control the add-on camera’s functions, and receive the resulting photos. One of the cameras pictured here is said to be based on the amazing RX100 (large one-inch sensor), and the other has a 10x zoom and a 1/2,3-inch 18-megapixel sensor. Photos will also be recorded on an SD card (maybe the iPhone gets smaller images?)

The design is utter genius. First, people have been asking forever for a camera that uses the iPhone as its brain. Second, while nobody is going to buy a chunky add-on iphone “case” that contains a camera, I can see a ton of people buying this, simply because it looks like a lens. It’s also the perfect upgrade for people who want a better camera than their iPhone can provide, but don’t want an SLR — after all who wouldn’t want to turn their iPhone into an RX100?

Prices? Who knows? But we’ll totally be keeping a close eye on this one.