Infuse is my favorite third-party media player for the iPhone and iPad. And until VLC for iOS returned to the App Store, there was really no competition. FireCore, the maker of Infuse, isn’t letting other apps get the last word. In today’s big update, Infuse has received a number of great features, including support for AirPlay and file transfers over Wi-Fi.

One of the biggest things missing from the original Infuse release was integration with AirPlay, but now it’s easy to beam any video (and Infuse supports a lot of formats) to another AirPlay-compatible device. There’s also support for fullscreen TV-out when using a HDMI or VGA adapter.

Another addition is FireCore’s Wi-Fi file transfer interface. This is really slick. You can send any video in the Infuse app via FTP, iTunes file sharing, or other iOS apps installed on your device. The best part is the ability to upload to a browser. The iOS app creates an ad-hoc network with your computer, which allows you to drag and drop videos to a webpage only you can access. It’s a pretty seamless way to transfer video without the need for cables. And it helps that it looks pretty. 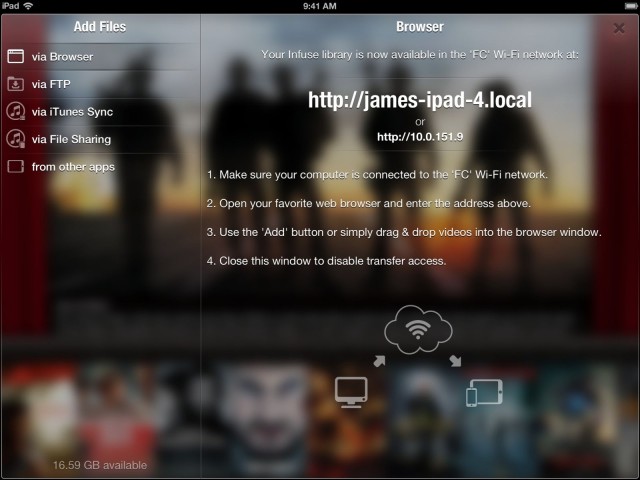 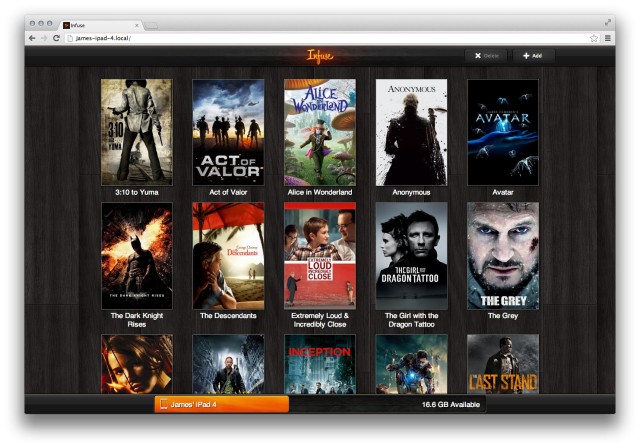 There’s support for trakt.tv so you can rate and share what you’re watching. The app also has Twitter and Facebook sharing. General performance and stability has been improved.

Infuse 1.3 is available now in the App Store, and the app costs $5 as a universal download. In my opinion, today’s update puts Infuse on par with VLC. If you’re in the market for an app like this, definitely check it out.