Id Software’s seminal first-person shooter franchise, Doom, came to the iOS platform back in 2009, with Doom Classic. It debuted as a $6.99 game, and we were all willing to pay for admission to a game that stole our hearts (and our free time) as young gamers.

About a year later, Doom II RPG showed up on the App Store at $3.99. It’s the sequel to 2005’s Doom RPG, a turn-based, more strategic take on the Doom universe.

Both titles are a part of gaming history, and they’re both available for $0.99 on the app store today. How long will they stay at this low price? Who knows? Not us.

Doom Classic features the original three episodes, “Knee-Deep in the Dead,” “Shores of Hell,” “Inferno,” and even includes a new level, “Thy Flesh Consumed,” for a total of 36 levels of shooter bliss, tearing through the legions of hell. You can listen to the original soundtrack or your own iPod music, set your own control scheme, and save your game on the fly. You certainly can’t do that with the original.

You’ll play as the quintessential Space Marine, battling his way through the hordes of hell that have mysteriously been unleashed upon an unsuspecting Mars. You’ll get to blast your way through enemies like the Imp, Cacodemon, and Hell Knight with weapons like the Chainsaw and the BFG 9000. That’s Mr. BFG to you, son. 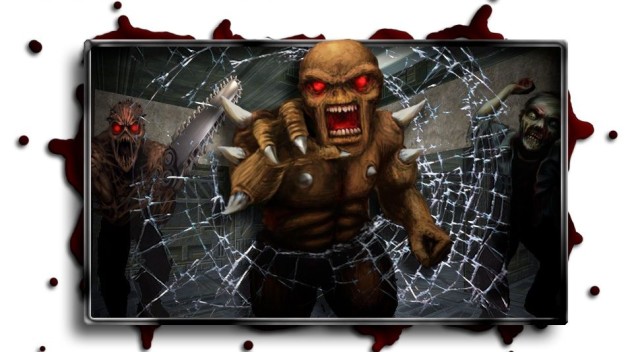 Doom II RPG has you choosing one of three different characters to battle hordes of evil monsters, including the Pinky, Cacodemon, Revenant, Sawcubus, and Sentinel. You’ll need to talk to survivor NPCs to get enough info about your environment to solve the puzzles. Of course, not everyone is forthcoming or even honest. You’ll still use a variety of weaponry (this is a Doom game, after all), like the Super Shotgun, BFG, and Holy Water Pistol.

A mysterious distress signal calls your team — two hardened Marines and a rookie scientist — to a Union Aerospace Corporation research facility on Earth’s Moon, but you were unprepared for what awaits you. The forces of Hell itself have taken hold of the station and its inhabitants! Zombies and demonic monsters roam the halls, killing all who cross their path. Your backup squad is dead. Mysterious scientists conspire against you. Even the facility’s AI cannot be trusted. You are being hunted from all sides. Now, you must fight to survive, and try to stop the invasion — and uncover the truth — by any means available. The fate of all humanity is at stake!

If you’re a Doom fan, or just want to experience this bit of video game history for an incredibly low price, grab Doom Classic and Doom II RPG from the App Store now.