Apple is on a quest to register the “iWatch” trademark worldwide ahead of its rumored smartwatch launch later this year, with filings already made in Japan, Taiwan, and Mexico. But the Cupertino company will hit a snag in the United States and the United Kingdom, where the iWatch name is already spoken for.

In the U.S., the iWatch trademark is owned by a small Californian company called OMG Electronics, which is currently trying to raise funds to launch a product under this name, Macworld reports. The company has already launched an Indiegogo project for the device, but it only managed to raise $1,434 in crowdsource funding. 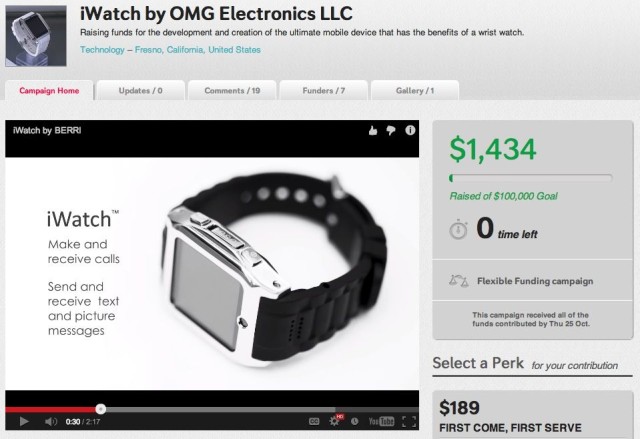 In the U.K., iWatch is claimed by Probendi Inc., which holds what is called a “community trademark” on the name. That means Probendi doesn’t just have rights to iWatch in the U.K., but across the rest of the European Union as well.

Probendi is a bit of a mystery company. It’s a network services firm that uses the iWatch brand for a smartphone app which “sends real-time audio, video and location data to the Critical Governance platform.”

The company is listed under an Italian address for the purposes of the trademark, but its website suggests it is stationed in Delaware on the East Coast of the U.S., and a company leaflet says it’s trading in Bogota, Colombia.

Probendi has held its iWatch trademark since 2008, and as it’s actively using it, there’s a possibility it would take action against others that tried to do so as well.

Apple doesn’t usually let things like this get in its way, however. If the company has decided on the iWatch name for its rumored smartwatch, then it’s likely to name it that regardless of who owns the trademark in certain countries. After all, it has enough cash to keep these companies happy if they decide to make a fuss.