This is Flowboard‘s second significant update since the app’s April launch, and like the first, brings meaty upgrades. In this case, the big news is that the app now gives you the ability to embed YouTube clips and PDFs in your digital publication, and thankfully adds a way to undo you last action.

For those not familiar with the Flowboard: It’s a free app which lets pretty much anyone — and by anyone, I mean the app is extremely easy to pick up and start using — throw together a digital publication, and then publish it online, or store it on an iPad. Elements can include text, photos, videos, graphic elements (and now, with this update, PDFs). Publications can be anything from presentations, to e-zines to portfolios, or anything in-between.

The biggest and funnest part of the upgrade is the YouTube thing. Being able to delve into the platform’s billions of videos just by typing search terms is a huge boon when throwing together a page.

The only drawback to this feature is that the YouTube video can, of course, only be viewed with a live Internet connection.

The undo button is pretty welcome as the app can still be a little finicky to use. Sometimes an attempt to reposition a photo results in moving it; an undo button cuts down on the swearing.

The ability to include PDFs on a page is the only new feature you’ll have to pay for. It comes with the $5 premium monthly in-app subscription, which also adds lots of extra storage space for image- or movie-heavy publications.

The other notable new feature is that Flowboard can now grab media files from Google Drive and Microsoft’s SkyDrive, in addition to being able to get stuff from Box, Dropbox and locally on the iPad.

There’s a slew of other little tweaks out in this update, and Flowboard’s designer promises more soon. 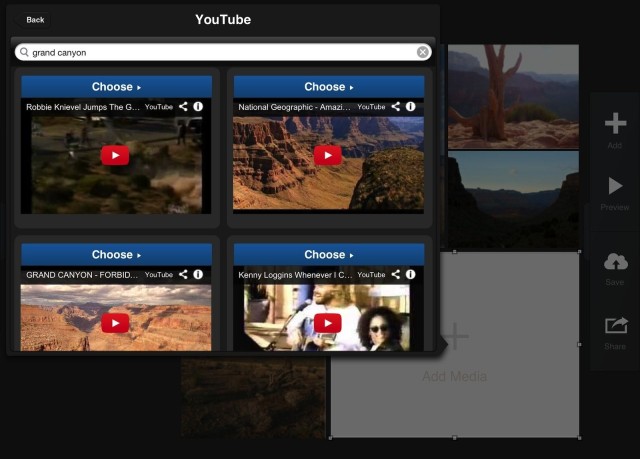