Earlier today it was revealed that Facebook was about to launch version 6.0 of its official iOS app, and now the update is available in the App Store. Facebook 6.0 brings Chat Heads from Facebook Home on Android, little chat bubbles that pop up whenever you get a new message in the Facebook app. There are also stickers, which are basically large emoticons you can send in messages.

On the iPad, Facebook has redesigned the news feed to make it better a better overall experience. 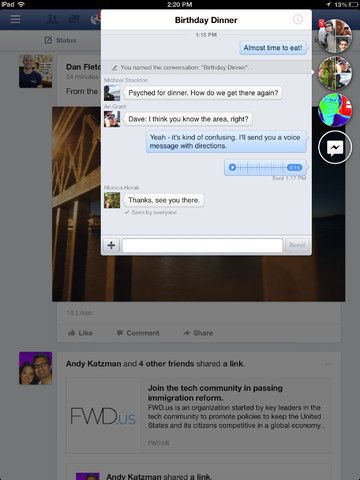 Chat Heads on the iPhone appear in the top of the app, while the profile pic bubbles are aligned to the right on the iPad. Unlike Android, Chat Heads are confined to only the Facebook app in iOS. Apple won’t let Facebook integrate them into the rest of the OS, although Facebook is trying to make that happen.

Another addition in today’s update is that you can browse the news feed by category (music, photos, games, etc.). The news feed on the iPad has been made prettier with bigger fonts, better image positioning, and a cleaner layout.