LAS VEGAS, CES 2013 – Last year, I gave my friend Rachel — a NYC singer/songwriter/comedian with an impressive array of musical proficiencies — my old iPad 2 as a gift. It was her first tablet, or even touchscreen device. I worried she wouldn’t know what to do with it, so when she opened the box and gave me an inquisitive cock of the eyebrow, I told her that the very first thing she needed to do with it was install Garage Band.

To this day, I think it was Garage Band that is the real gift to Rachel, not the actual iPad. Using Garage Band, she can quickly jot out a song idea on the road, or even fully record a fantastic mix, all from a device small enough to fit in her purse. There’s only one trade-off: you have to use the touchscreen. There’s no physical instrument as portable as the iPad to take on the road with you.

That’s where the Jamstik comes in. A product so new and in-concept it doesn’t even have a distributor yet, it’s one of our favorite products of CES. It’s a tiny, ukelele-sized guitar with real strings that connects to your iPad over WiFi, and not only can you use it to record or even perform with your iPad, but it can also teach you how to play the guitar… or serve for an impromptu game of Guitar Hero. 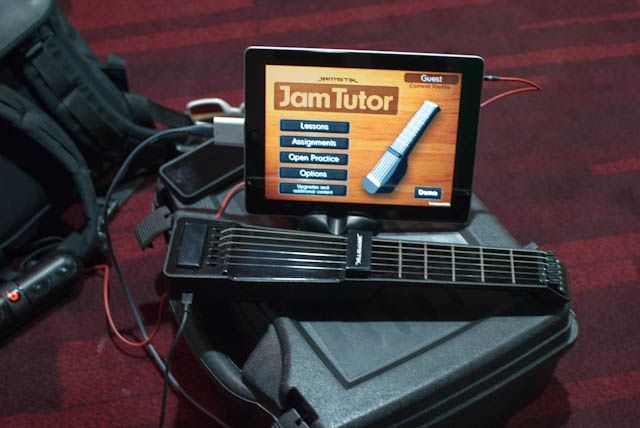 A tiny little black guitar about a foot and a half long, the Jamstik is small enough to slip into a briefcase, but when connected to an iPad it allows you to control any one of the 400-odd apps on the iOS App Store that support MIDI input. In other words, though the Jamstik will ship with various apps available for it, it isn’t proprietary: there’s already an existing library of awesome apps that can use this.

Here’s how it works. Pairing your Jamstik over WiFi and loading up, say, Garage Band, you can enter notes just by playing them on the guitar with real strings. The frets are mostly for show, since finger-sensing infrareds underneath the fret strings are what chord you are actually playing, but the strings for plucking or strumming are real, and you actually need to hit them to release the note. Octaves can be changed by a built-in D-Pad.

Here’s a video of it in action:

It’s the versatility of the Jamstik that was really impressive, though. First of all, you don’t just play “guitar” with the Jamstik: you can use it to input notes into any instrument, so you could load up Garage Band and input a piano or drum track using the Jamstik. 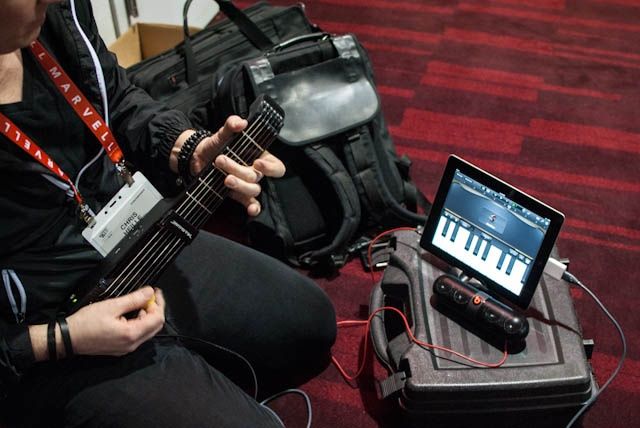 It’s the wide-array of apps and possible use cases for the Jamstik, though, that really excite. We mentioned that this would be a great accessory for musicians who want to write or perform tracks using their iPad without lugging a full-sized guitar or keyboard around, but you could also use it to teach someone how to play the guitar using Jamstik’s guitar tutorial app. That app will have an open format for writing tutorials for different songs, and the resulting files can, if you get bored with study, be used in another Guitar Hero style app for a bit of quick gaming.

The guys at Zivix, the company behind the Jamstik, envision the Jamstik coming with three main apps: the Jamtutor (which will teach you guitar), the Jamhero Tab System (which is the Guitar Hero like game), an Jam Live Music Re-Mixer (an app that allows you to easily jam some music without worrying about actually needing to play too much).

We’re not exaggerating when we say that the Jamstik is one of the most exciting and cool products we saw at CES. In fact, as I was being given a demonstration by Zivix’s representatives, a number of CES attendees came by trying to ink deals for the Jamstik, only to be turned away. Zivix doesn’t even have a booth here at CES, and they aren’t even technically showing the Jamstik! 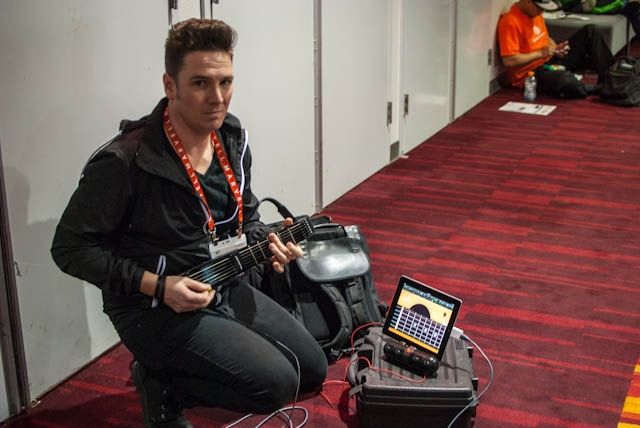 The guys behind the Jamstik tell me that the accessory will be on the market by the end of the year, and they are looking at a retail price-point of about $299, once they find a distributing partner. I can’t wait: I know what my friend Rachel is getting for Christmas.