Twenty five years after Apple aired its famous 1984 commercial, it’s Steve Jobs that is being portrayed as Big Brother.

In a remake of Apple’s famous 1984 ad, which famously portrayed IBM as a force of oppression, startup doubleTwist has Apple pegged as the oppressor.

The web ad — clearly designed to go viral — shows armies of iPod-wearing drones shuffling into an auditorium. It’s a shot-for-shot remake of the original but done on the cheap: it’s animated. The drones sit to hear a propaganda speech from a skinny white guy wearing distinctive Lennon-style glasses — Steve Jobs.

“No other choices shall detract from our glory,” he commands from the screen.

And then into the auditorium runs a female athlete (anime-style) who throws a hammer and shatters the screen — just like the original ad. It closes with the message: “On October 6th, doubleTwist brings you.. Choice.”

What Choice is, doubleTwist isn’t saying. But if you download the doubleTwist app now, the update will be automatically downloaded on October 6, the company’s website promises.

Cofounded by Jon Lech Johansen (AKA DVD Jon), the hacker who famously reverse engineered DVD encryption, DoubleTwist is a San Francisco company that makes a software media player of the same name. The media player is much like iTunes, but unlike Apple’s software, it syncs with hundreds of gadgets, including Palm’s Pre, Google Android devices and RIM’s Blackberries.

The company is no stranger to controversial guerrilla advertising. Earlier this summer, the company commissioned a billboard next to Apple’s flagship San Francisco store advertising it’s software.
“The Cure for iPhone Envy,” the ad said. “Access your iTunes Library on any device. In Seconds.”

The billboard didn’t last long — Apple soon had it taken down. See it below.  And here’s the doubleTwist new web ad in full: 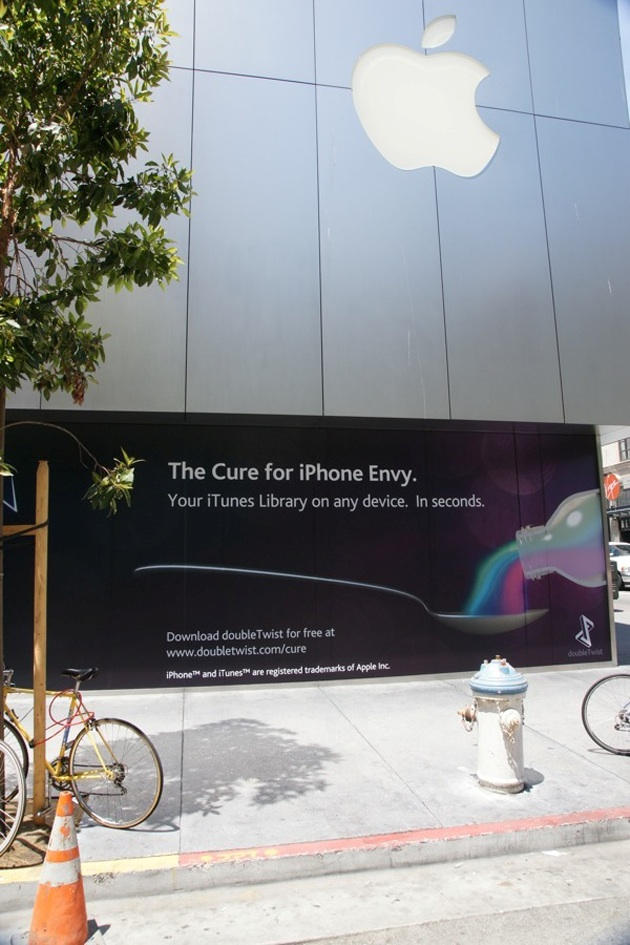 Number of comments on this postLeave a comment
Posted in: News Tagged: Apple, Steve Jobs