Microsoft today officially announced their new tablet, Surface for Windows, in two flavors, one with ARM chips (just like the iPad) and one with Intel chips, like standard laptops, including Macbooks. This is Microsoft directly competing with Apple for the iPad market, for sure.

Not surprisingly, their foray into making their own hardware focuses on the tech specs, even when they are talking about making the software the main point. The press release calls out the virtues of a cover with a super thin keyboard (called a Touch Cover, an integrated kickstand, VaporMg-branded molded magnesium alloy and the like. There’s no details out yet as to whether the keyboard will come with the tablet or be an add on, as yet.

There’s no mention yet of pricing, but we do know that the RT version (running the ARM chip) will be available at or around the same time as the computer version of Windows 8 will be, with the assumedly more “pro” model available 90 days later. Both models will be sold online and in Microsoft Store locations. 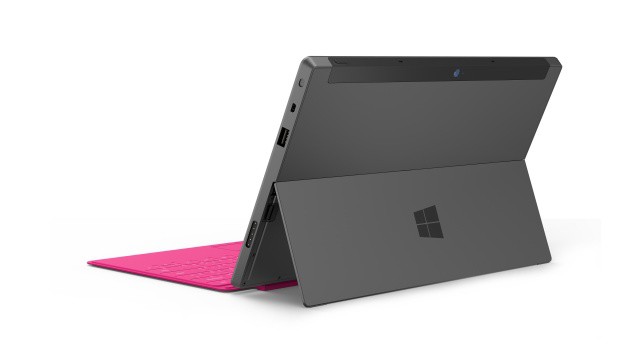 It’s a fairly sweet looking tablet, at least in the product shots and promotional video released today as well. Though, it does look a bit on the thick side, right?

While the iPad’s tech specs are fairly stunning, we also know that the killer feature of Apple’s tablet is the app ecosystem. The only way to compete in a market so utterly owned by Apple will be to encourage and support developers in creating apps for the device, or Microsoft will have a tablet-shaped Zune experience all over again.

We’re sure to keep our eyes on this as more details emerge.