Apple’s new MacBook Pro follows the fine tradition of the iPhone 4 and third-gen iPad in that it has a super high-resolution Retina display: a 2880 x 1800 panel with an amazing 220 pixels packed in per inch.

Nothing could be further from the truth.

Apple’s new MacBook Pros have absolutely great displays, but they need every single pixel they have, because the truth of the matter is that Apple’s got a long way to go before it catches its display tech up to the incredible power of human vision. And that’s a good thing, because it means we’ve got a lot to look forward to.

What Apple Means By Retina

At this point, everyone knows that Steve Jobs, the master showman, fudged facts a little bit when he introduced the iPhone 4’s Retina display back in 2010.

What Steve Jobs said at the time was this:

It turns out that there is a magic number right around 300 pixels per inch that, when you hold something around 10 or 12 inches away from your eyes, is the limit of the human retina[‘s ability] to differentiate the pixels.

Apple called such a display a Retina display, and when the new iPad was announced in March as having one, Tim Cook clarified a bit on their definition of Retina:

In other words, because the average person holds a tablet further from their face than their phone, the new iPad didn’t need to have pixels that were as small as the iPhone’s, meaning the new iPad could get away with a pixel density of only 264 pixels per inch. Likewise, people sit even further back from their MacBook Pros, meaning their Retina displays only need 220 pixels per inch.

So far, so good. There’s only one problem: Steve Jobs said that the human eye, viewing a display from 12 inches away, can’t discern individual pixels if the density is over 300 pixels per inch. Except that this “magic” number is wrong. The real number is closer to nine hundred pixels per inch. Apple’s Retina displays are only about 33% of the way there.

Apple uses Retina as a marketing term, and it’s a great one. But it also implies that there’s nowhere else to go from here when it comes to resolution, which simply isn’t true. Ten years from now, we will all own Macs, iPhones and iPads with screens so crisp, looking at the iPhone 4S or new MacBook Pro will be like looking at a 1024 x 768 CRT from 2002. And that’s something to be excited about.

To understand why there’s so much more to be done with display resolution, you need to understand how Steve Jobs came up with his initial “magic number” for Retina: in short, he based it on a person having 20/20 vision. Seems reasonable, because colloquially, 20/20 vision is synonymous with having perfect eyesight.

The only problem? 20/20 isn’t perfect eyesight at all.

When we talk about a person having 20/20 vision, what we’re actually referring to is how well they can read a standard Snellen eye chart, the kind you see hanging in optometrists’ offices all over the world. If a person has 20/20 vision, it means that a person standing 20 feet away from such a chart can read what an average person could see from the same distance. This is considered standard vision.

But while 20/20 vision might traditionally refer to “standard vision,” most research suggests that normal vision is actually much better than 20/20. In fact, people with normal vision usually won’t see their eyesight degrade to 20/20 until they are 60 or 70 years of age!

Got that? Apple’s definition of Retina is based upon the vision of seniors.

What Is The Resolution Of The Human Eye?

So what are the limits of vision? How small would a pixel actually need to be for it not to be disernible from other pixels with the human retina? To discuss this, we first need to explain a technical term: arc minutes. 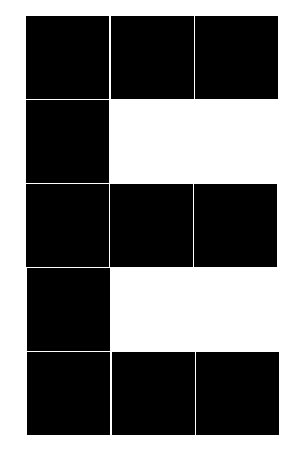 Look at the image of the letter E to the right. It’s made up of 15 pixels, in a 5×3 grid: 11 black pixels and four white pixels. Imagine you are getting further and further away from the letter. At a certain point, you’ll no longer be able to see the white lines between the black pixels on the E.

Stop. If you have 20/20 vision, it’s generally accepted that, from this distance, each pixel on the E is now one arc minute in size.

This is how Apple builds its Retina displays. According to Apple’s definition, a pixel on a display must be no larger than one arc minute as seen from an average viewing distance by a person with 20/20 vision in order to qualify as Retina.

But as we’ve seen, 20/20 vision doesn’t mean perfect vision, and it arguably doesn’t even mean good vision. The pixels are too big. How small do we need to make them to get a True Retina display?

Unfortunately, there’s no universally accepted limit to what the human eye can see. According to DisplayMate’s Dr. Raymond Soneira, the industry’s go-to guy on display technology, the resolution of a perfect human retina is 0.6 arc minutes per pixel. So for the iPhone 4S, for example, to be truly Retina, it would need to have pixels that are 40% smaller than it currently has.

Soneira’s resolution isn’t universally accepted though. Others disagree and think the eye is much more powerful than that. J. Blackwell of the Optical Society of America determined back in 1946 that the resolution of the human eye was actually closer to 0.35 arc minutes. Again, this means that for an iPhone 4S to have a true Retina display, it would need pixels that were 65% smaller than it currently has.

For the iPhone 4S to have a true Retina display, it needs 65% smaller pixels.

Some studies push the limit of human vision even further. However, at the end of the day, it’s generally agreed that whatever the limit of human sight is, it can’t discern individual pixels smaller than 0.3 arc minutes, with most studies hovering between 0.3 and 0.4 as the limit.

In other words, for a display to truly, indisputably match the resolution of the human eye and be considered true Retina, it needs to have pixels that are no larger than 0.3 arc minutes in size from an average viewing distance.

This might seem boring, but once you know this, you can actually work out what Apple’s screen resolutions would have to be to be true Retina. This is where it gets fun, because now we can get a glimpse at the True Retina Macs of the future!

Given the above, here’s a breakdown* of what resolutions every current Apple display on the market would have if they stayed the same size, but were upgraded with True Retina displays.

Incredible, right? According to our math, an iPhone with a true Retina display would have more pixels than today’s 27-inch iMac!

But so what? What do all of these numbers mean in practice? Why should you care if you’re already happy with your Apple Retina Display?

The image above is NASA’s famous “Blue Marble” super high-res image of Earth. It’s probably the most beautiful and most detailed photo of our planet ever taken. And short of flying off into outer space, the only way you can even come close to taking in all its detail at a single glance is if you have a True Retina display.

The big boxes overlaid directly over the Earth in the image above represent the various resolutions of future Macs with True Retina displays. Anything inside a box would be what you would see on the specified True Retina Mac or iOS device display. The smaller boxes at the bottom indicate the resolutions of Apple’s current Mac and iOS line-up.

As you can see, with a True Retina 27-inch iMac or iPad, you can pretty much see the entire planet at once, with each pixel mapped one to one with NASA’s original. On a 13-inch True Retina MacBook Air, you’d take in almost all of North America. On a True Retina iPhone, you’d get the whole West Coast.

Compare that to Apple’s current models. With the 2012 Retina MacBook Pro, you get, at best, the same amount of detail you’d get on a True Retina iPhone. On an 11-inch MacBook Air, you’d only be able to see most of Texas. And on an iPhone 3GS, you’d be lucky to see all of Delaware.

If you want to see this image in its original super high resolution, you can download it here.

Such an argument is faulty. For one thing, no one sits a uniform average distance away from their devices. When you text on your iPhone, you might hold it at twelve inches, but if you’re squinting at it in the middle of the night to answer a phone call, you might hold it six inches away. And while you might write an email on your MacBook Pro at 24 inches, you might lean in on the edge of your seat during an exciting movie or game to closer to 18.

The truth is our devices suck us in as close as we can be to them. And if our displays are ever going to reach their ultimate form — living paper — they need to have enough resolution that we can zoom in to see more detail just like we would with a piece of paper: not by pinching or zooming in with your mouse, but by getting as close to the screen as we can get. Imagine the day when you can pull out a magnifying glass to check out a picture on your iPad, and instead of seeing pixels,
you see a whole world of perfectly resolved detail that you didn’t even know existed.

But there’s another reason why everyone should care. Back in 2010, Japan’s NHK Science & Technology Research Laboratories discovered that across the board, the smaller the pixels, the more real an on-screen object seemed to the person viewing it, even if they didn’t have perfect vision. In fact, this effect is so profound on individuals that it eventually reaches a point where you have pixels small enough that on screen objects are completely indistinguishable from real objects.

That is the future of displays: screens so perfect that FaceTiming with a friend is visually indistinguishable from having a conversation in person with them, where watching a movie is like peering out a window to another world, and where playing a video game is like having a real-life adventure. That is why we need True Retina. And that is where Apple is ultimately going to take us.

* – The math behind how we did these calculations is a little complicated, but a brief word of explanation. If we assume that the resolution of the human eye maxes out at 0.3 arc minutes per pixel (see above), we can then determine how many pixels a display needs to have (given average viewing distance) to be a true “Retina” display to everyone, even if they have better than 20/20 vision.

To do this, we need to first calculate the area size a display takes up in a person’s field of view, or in other words, how big a square of light is actually shining on their eyeball at a given time. This is measured in degrees of apparent size, which we can then multiply by 200 (60 arc minutes per degree divided by 0.3 arc minutes) to come up with the minimum number of pixels we need for True Retina.

This might all seem complicated, but once you understand this math, it’s incredibly useful for doing things like figuring out how big a TV you need for your living room, or what row you should sit in a movie theater. For further explanation, consult this page.

Many thanks: The help of reader Neven (@randomoneh) was invaluable in gathering a lot of the data for this piece together. In addition, I’d like to thank my friend Gil Forsyth for helping me with some emergency last minute trig problems. You guys are much, much smarter than me.