Apple’s retail division is like none other in the world. Ron Johnson and Steve Jobs created the most profitable, and arguably best overall, consumer retail experience together way back in 2001. Fast forward to today and Apple Stores are outperforming all other retailers by a wide margin.

Specifically, new research shows that Apple Stores are performing 17 times better than the average retailer. Two luxury brands, Tiffany and Coach, trail behind in a distance second and third.

According to RetailSales, “It’s not surprising Apple leads the pack,” but it is surprising “how far ahead of the competition they are, especially considering the company only has 10 years of retail experience.” 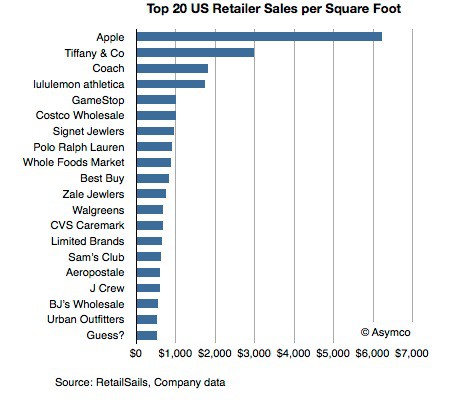 RetailSales calculated the top 20 retail chains (including restaurants) by sales per square foot on a yearly basis. $300 per square foot in U.S. retail is considered respectable these days, and the median for the top 20 retailers is $787. Based on physical sales (so not including the online store, App Store and iTunes), Apple is more than twice as efficient as the high-end Tiffany & Co. Based on the national average, Apple is 17 times more efficient at sales than the average retailer, netting a staggering $6,000 per square foot.