After she won, Apple flew her to the Beijing to accept her award. Chunli was escorted to Apple’s Chinese corporate headquarters and then taken to the Sanlitun Apple store to accept her gift card and talk to the press.

M.I.C Gadget has a profile on Fu Chunli:

Fu Chunli was not a big fan of Apple, and had only purchased her iPhone for about one month, still learning how to use the App Store. She didn’t know anything about the competition until she was contacted by Apple. When she received a call from staff at Apple (China), she thought it was a hoax. She was still confused when a friend told her that she received a prize from Apple, but did not believe her luck until she saw an email from Apple Inc. Many friends called her to congratulate her on her good fortune. The local media now call Fu Chunli as the ‘Apple girl’ from China.

Journalists captured shots of Chunli learning how to use her iPhone at the Apple Store. She also tried out products like the MacBook Pro. Hopefully she’ll put that $10,000 gift card to good use. 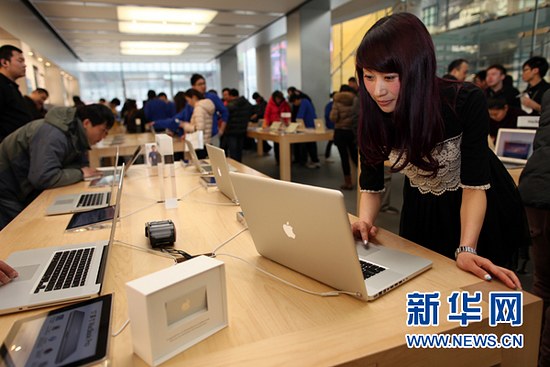 Apple’s growth in China continues to skyrocket as the company’s retail footprint expands. With the addition of China Telecom as an official carrier partner for the iPhone 4S, the world’s largest carrier, China Mobile, is the only unofficial iPhone partner left. Tim Cook was spotted this morning in Beijing meeting with unnamed officials about what was presumably the China Mobile deal.