Have you ever wanted to quickly send a file or share a contact with your iPhone over Bluetooth? Unfortunately, iOS 5 doesn’t have a built-in method for Bluetooth file sharing, so you’re out of luck if you don’t jailbreak. 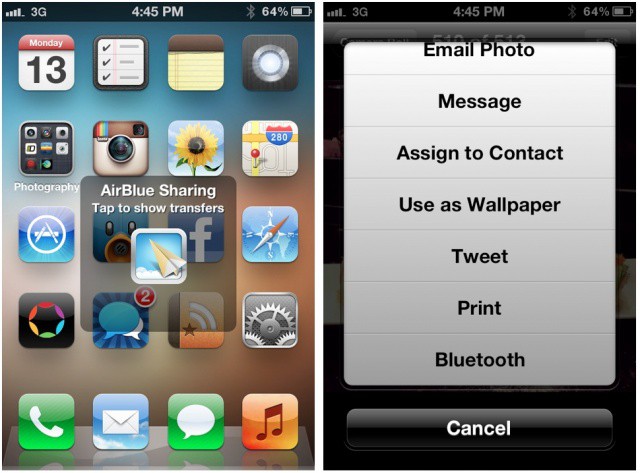 The last Bluetooth sharing tool to hit Cydia was called Celeste, but that app has not been updated for iOS 5 yet. Unlike Celeste, this new jailbreak extension requires absolutely no configuration. Here’s the full rundown of what AirBlue Sharing has to offer:

Developed by Eric Day, AirBlue Sharing costs $5 in the Cydia Store. You can enable Bluetooth receiving mode with an Activator action in the extension’s settings, and it integrates into the default iOS sharing menu. You can store sent files in apps like Dropbox or iFile. If you’ve wanted a way to send files over Bluetooth or WiFi, then AirBlue Sharing is definitely worth $5.