Despite recent reports detailing the mistreatment of factory workers assembling Apple products in China, there’s still a huge demand for jobs at the Foxconn factory. Thousands of people lined up for hours outside a recruitment agency in the Chinese city of Zhengzhou in the hope that they would be chosen to build iPhones at the Foxconn factory.

M.I.C. Gadget reports that the lines stretched a whopping 200 meters, with thousands of hopefuls clutching applications forms for the jobs in Foxconn’s Zhengzhou factory as the company ramps up its iPhone production. — likely for the sixth-generation iPhone 5.

Foxconn is reportedly working with the city to expand its workforce with another 100,000 workers, who will start on a basic salary of 1650 yuan ($261). 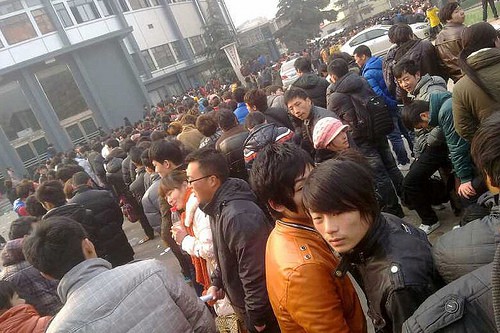 After appraisal, that salary will rise to 2400 – 3200 yuan ($379-$506). That seems low, but workers will also live free within Foxconn dormitories, and they will not be required to pay for their own food. This is, according to M.I.C. Gadget’s report, what attracts so many young jobseekers to the role.

This influx of staff will reportedly help Foxconn ramp up iPhone production, and although it doesn’t mention the iPhone 5, this is likely to be the reason for the production boost. Apple has already caught up with iPhone 4S demand, so it’s doubtful these staff are required to increase production of the fifth-generation device.

This strengthens a previous report that claimed Foxconn is gearing up to produce the iPhone 5, ready for a launch this summer.

But the huge interest in these jobs will be a surprise to many, following recent reports that detail the harrowing conditions Chinese workers must suffer each day. Does this confirm Apple’s claims that those reports are misleading and inaccurate?