Apple has posted its 2012 proxy statement for investors. In the document, Apple reveals the compensation that its executives earned last year alongside more background information.

Notable facts from the document include CEO Tim Cook’s 2011 compensation, totaling an impressive $376,180,000. 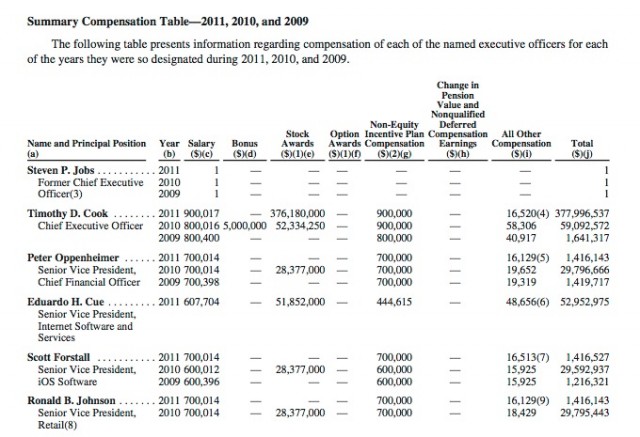 Apple shareholders can still receive a printed copy of the proxy materials free of charge by following the instructions provided at www.apple.com/investor or in the Notice of Internet Availability of Proxy Materials that will be mailed to individuals who were Apple shareholders as of December 27, 2011. Apple’s 2011 Form 10-K was filed on October 26, 2011 and may also be viewed at www.apple.com/investor.

Apple designs Macs, the best personal computers in the world, along with OS X, iLife, iWork and professional software. Apple leads the digital music revolution with its iPods and iTunes online store. Apple has reinvented the mobile phone with its revolutionary iPhone and App Store, and has recently introduced iPad 2 which is defining the future of mobile media and computing devices.

The proxy statement also reveals that Steve Jobs was credited his annual $1 salary in 2011: