Despite its new dual-core A5 processor, its much-improved 8-megapixel camera, and a wireless chip that allows the device to use both CDMA and GSM networks, Apple’s new iPhone 4S only costs the Cupertino company around $0.49 more than the iPhone 4.

Research firm IHS iSuppli has torn down Apple’s latest device and estimates that its 16GB iPhone 4S costs $196 to make — that’s $188 in parts and $8 manufacturing costs. The 32GB model costs an additional $19 at $215, and the 64GB model costs $254. All three devices are identical internally, apart from the differences in flash storage. 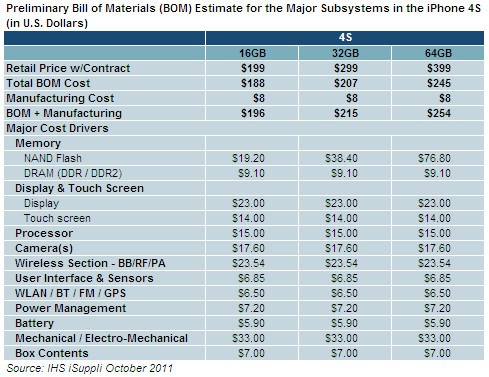 That price includes all of the iPhone 4S’ internals, including its display, cameras, battery, flash storage, and antennas. However, it does not include software, licensing, or other costs that are associated with creating and designing the phone.

IHS iSuppli’s teardown has revealed some interesting thing’s about the latest device, including a new cellular network antenna, which the firm describes as “unique” in its ability to support multiple network technologies. It also mentioned the device’s Avago power amplifier module, which “amplifies a radio signal prior to transmission.”

What makes the converged Avago part unique is its capability to support both 2G and 3G cellular technologies across multiple bands thus reducing the number of components and PC board footprint required.  While Avago is by no means the only company supplying these types of devices, it is the first to be implemented by Apple.