A new spy shot claiming to show the next-generation iPhone has emerged, and it appears to show a forward-facing camera.

If the spyshot does indeed show the new iPhone, a forward-facing camera would be a cool but surprising feature. Although high on many iPhone users’ wishlists — it would enable iChat videoconferencing from anywhere — the feature seems too Dick Tracy to be true, especially with AT&T’s bandwidth-challenged 3G network.

A forward-facing camera was mentioned in a recent Apple patent granted April 16 — although this doesn’t mean much. Apple patents everything, and a ton of patented features never see the light of day. 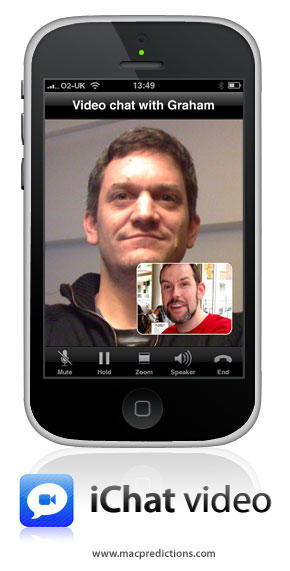 (Mockup of an iPhone video iChat by Graham Bower of MacPredictions.)

Published by an Italian iPhone fan site, iSpazio, the spy picture shows an iPhone with an all-black frame, not a silver one, which is consistent with many rumors.

The earpiece on the new iPhone is higher than current models, and below it is a glowing green light — just like the activity light on MacBook iSight cameras showing the camera is in use. The glowing light is slightly offset, which adds a small measure of authenticity to the picture.

On the iPhone’s screen is a new voicememo app that will be included in the iPhone OS 3 (Here’s a video of Apple’s Scott Forstall showing it off).

The iSpazio site claims the picture was sent to them, and was snapped on the screen of a computer “inside the Apple site.” What this means is unclear. Is it a snap of a screen taken inside Apple, or a hidden page not yet published on the Apple.com website?

For some reason, iSpazio removed the symbol showing the iPhone’s wireless carrier using Photoshop before publishing the picture.

The screen appears to show a webpage announcing the new iPhone’s immediate availability. The screenshot includes a line that says, “Available Today.” There’s also half of a tagline that reads in part: “..ny, curios, advanced. The new iPhone is for ev…”

The “ev…” at the end must mean “everyone.” But anyone got a clue what the “…ny” at the beginning might be?

Link to the iSpazio spyshot.