The Nuu MiniKey is a snap-on case for your iPhone 4 that aims to transform the way you type on your device. It features a slide-out QWERTY keyboard and connects to your device via Bluetooth, and promises to be “perfect for blogging and emailing.”

The MiniKey is made from plastic – with a smooth, rubbery coating – and is only available in black. It provides easy access to all buttons & ports on your device – except for the SIM card slot. It features a Li-Polymer battery that offers around a week of fairly active use, or about 30 days standby time – charging via micro-USB in 3-4 hours.

Unlike other keyboard cases, the MiniKey features a backlit keyboard for typing in low light, which can be toggled on or off to preserve its battery life. In addition to four navigation keys and a command key, nearly every key also has a function, providing timely access to numbers and symbols.

The MiniKey’s advantages really speak for themselves. For anyone who’s used to a physical keyboard on their smartphone and is struggling to adjust to the iPhone’s on-screen setup, the MiniKey is a great alternative. It’s also useful to those who find themselves typing extensively on their iPhone.

While using the MiniKey, the iPhone’s on-screen keyboard disappears and allows you to take advantage of writing in fullscreen without a keyboard taking up most of your space. The keys are a good size – at least for my fingers – and after using them for a few days, you’ll soon become accustomed to the MiniKey’s layout, and you’ll only need to look down at it when you want to select a function. 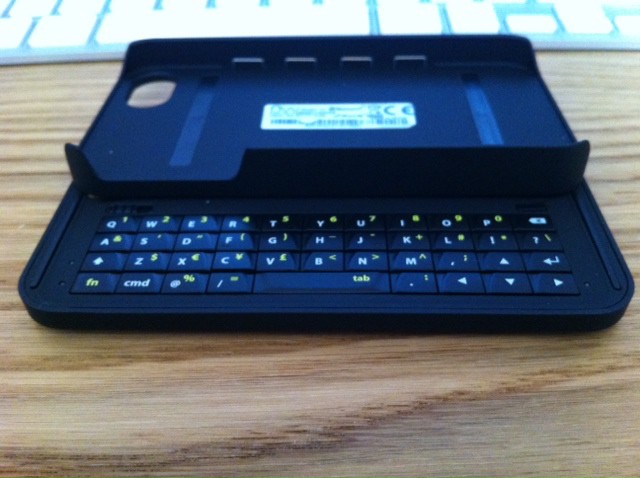 The navigation keys make it really easy to navigate between words and letters, and I find it’s often easier to use these than trying to reposition your cursor with your finger. By holding down the ‘Fn’ key you have access to the all of the functions, and the command key allows you to quickly utilize functions such as copy & paste. When you press the function and shift keys, tiny lights next to each key will let you know you’ve activated them.

The backlit keys keys make the MiniKey fantastic for typing in the dark, and don’t render it useless in low light conditions like some other keyboard cases.

The slide-out mechanism feels nice and smooth, and seems to be very sturdy – as if it’s going to stand the test of time. The keyboard disconnects itself from your iPhone when it’s not in use to preserve battery life and will automatically connect – near instantly – when you slide it out. Taping any key when you open the keyboard will instantly unlock your device.

As far as looks go, the MiniKey has been designed to be a sophisticated as a keyboard case can be, with nice tapered edges and an impressive finish.

Although the MiniKey beats most of its competitors when it comes to image, it’s still big and bulky. It adds a significant amount of depth to your device, nearly doubling its thickness. Fortunately it’s not too heavy, but you will notice a slight difference in weight.

There is a toggle button on the side of the MiniKey which allows you to switch between the physical and on-screen keyboards, though I couldn’t really see much use for this. When the keyboard is tucked away, it’s disconnected from your device and so the on-screen keyboard is displayed anyway.

Unless you require a physical keyboard, the MiniKey is not worth its $70 price tag. If you’re already used to the iPhone’s on-screen keyboard and you just want a keyboard case because it’s a gimmick, you won’t have the patience to learn the MiniKey’s setup and you’ll just keep switching back to the iPhone’s virtual keys – rendering this case a pointless purchase.

However, the MiniKey is a terrific solution for iPhone users who have recently switched from a physical keyboard and are struggling to pick up the iPhone’s virtual keys. If you’re looking for a keyboard case, the MiniKey is certainly one of the best available, and where it may lack it battery life, it stands out with its nice design, backlit keyboard, and helpful features and functions.

While it may be big & bulky, unfortunately all keyboard cases are, and so it’s important to pick the one that looks and feels the best, with the most functionality. I think the Nuu MiniKey gets it spot on.