Today is the day that will bring us one step closer to the death of the cloud. That crucial new part of the internet that is gaining popularity due to the likes of Hulu, Netflix, MobileMe, DropBox, Crashplan, etc. is about to get another blow — AT&T on Monday started restricting the amount of data its millions of broadband customers are able to use in a month. Data is now restricted to as little as 150GB a month.

That isn’t good news — users should an uproar over the whole thing. It means that a large number of people using broadband in the U.S. will be severely limited in what they can do online. They might risk extra charges or even total loss of their broadband access. This comes as Apple is rumored to be on the verge of introducing a more Cloud-based model of computing for millions of customers.

The changes AT&T has made bring new monthly limits of 150 GB for DSL and 250 GB for UVerse. AT&T joins Comcast, which applied a 250 GB data cap to their broadband services several years ago. The companies claim that 99% of users won’t be affected by the data caps, but I’ve exceeded them already, just by using an online backup plan.

The changes come, as the internet sees explosive growth. The number of online services that require huge transfers of data has exploded: YouTube, Netflix, Hulu, Crashplan, DropBox, and MobileMe, to name just a few.

And so have the number of devices: Apple TV, iPhone, iPad, etc. Modern homes generally have multiple devices accessing the internet, multiple users, and on demand streaming is gaining popularity as a means of watching TV on the internet instead of paying for cable.

This shift in consumer demand puts us at a crossroads. Many people like myself are considering dumping cable TV and switching to the internet. Some of my friends have already made the switch and they now access over-the-air HD TV and use their internet connection to catch their favorite TV shows, movies, etc. using services like iTunes, Hulu, Netflix on their Apple TV, Mac, iPhone, or iPad. People are also moving to cloud services on the internet like video and music streaming, cloud storage, etc. Cloud services and all the other services that originate on the internet are going to get killed or severely impacted if something isn’t done about data caps.

Comcast is my ISP and their 250 GB data limit, which they claim impacts less than 99% of their users, has already caused me some concern. You see for the first time that I can recall I consumed 200 GB of data in February, 523 GB in March, and 271 GB in April for downloads. I’ve exceeded my download cap twice in less than 12 months. The reason – I bought a subscription to CrashPlan, an online backup system. 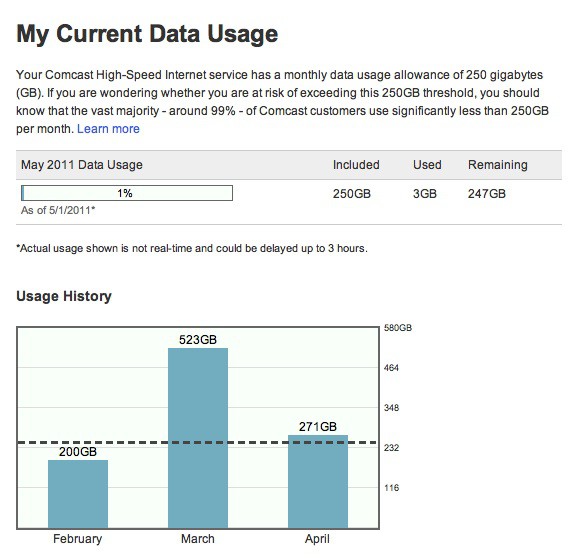 It isn’t clear how Comcast will react to my circumstances. I haven’t received a letter yet from Comcast, but according to their FAQ I could loose my internet access for up to 12 months after receiving a letter and exceeding the 250 GB cap more than once or twice in a 12 month period. I didn’t intentionally mean to do exceed the limits. I was just using a service I paid for the way I’ve always used it without worrying about about data caps. I’m sure with all the expanded cloud services that I won’t be the only customer running into this same situation.

I’m writing this today on May 1st and I’ve already used 3 GB according to Comcast’s Usage History Meter — which by the way is very difficult to locate on their web page and only allows me to see the last three months. It would be nice to know my last 12 months of usage so I could plan accordingly. However, I am not sure that would help, since I don’t really have any idea about the bits flowing in and out of the various applications I use. My head spins when I think about it. I did some research and located a page that said watching Netflix, which I subscribe to, can use 3600 MB for a two-hour HD movie or 500-700M MB for an SD movie. This means that you could watch about 40 HD movies under the 250 GB cap, but then you’d have nothing or little left over for the rest of the internet usage in your household. I guess I could research the usage for every application I use and thinking about that gives me a headache.

In my opinion both AT&T and Comcast have one thing in mind and one thing only they want to control who I get my content from and if it is from someone else then they want to limit how much I can get from them.  I’ll have to think twice before I stream my next HD video from Netflix which is probably exactly what Comcast wants. Comcast would prefer that I spend money on their video services like Comcast’s On Demand rather than Netflix, Hulu, or iTunes.

I think its time to convert the internet services that transmit data provided by Comcast and AT&T into utilities just like my electric company. After all, the costs for bandwidth are steadily dropping. So why haven’t I seen improvements in bandwidth, download caps, and speed? It’s probably due to the fact that companies like AT&T and Comcast spend very little on their infrastructure when you compare that expenditure to the amount of revenue they earn. If we had better infrastructure in the U.S. I’d probably be paying $.10 or less per gigabyte for my internet usage. I’m paying about that much for electricity currently per kilowatt.

Comcast offers an alternative business class service for $99 a month that doesn’t have a data cap, but it lacks speed and has features that I don’t need or want. I’m running a household after all — not a business. I’ve told Comcast that its current plans don’t meet customers needs. Especially the data caps – the world has moved on since those were implemented and 250 GB isn’t enough for people interested in cloud or media streaming services like I am.

Unfortunately, the sad fact is that as we all look to the cloud for more services, the circumstances are starting to get grim. I predict that many more of us will hit the ceiling, preventing us from using the internet as we would like too. And that my friends, is what will ultimately kill the cloud.

Who else uses more than 150GB of data a month?