Surprise broadway smash Come From Away been filmed and sent to Apple TV+. The 9/11 musical follows hard on the heels of the Hamilton concert movie on Disney+.

The question is, will Come From Away come close to the success of its predecessor?

Come From Away review

Based on true accounts, Come From Away is the story of the small Newfoundland town of Gander, nearly the last point east in North America. After the terror attacks of September 11, 2001, almost 40 planes were rerouted to Gander because air traffic control towers couldn’t think of anyplace more out of the way and thus more safe.

Come From Away is a show about the townspeople who banded together to try to make Gander hospitable for the thousands of refugees unexpectedly dropped on the town’s doorstep, and the people on those planes sweating through the revelations about the horrifying events of that day.

The music has a distinctly neo-Irish bent, somewhere between Mumford & Sons and Celtic Thunder. It’s novel enough, but nothing that lends itself to an hour and 45 minutes of nonstop acoustic guitar and stomping singalongs.

The writing is mostly very clever (for Broadway), if never laugh-out-loud funny. And the performances are mostly quite winning. The movie is just a recording of the show with an understandable reliance on mids and mediums to show the performers (who spend a lot of the show in chairs). But there’s no denying that seeing a recording of a Broadway show and being in the audience are two fundamentally different experiences. 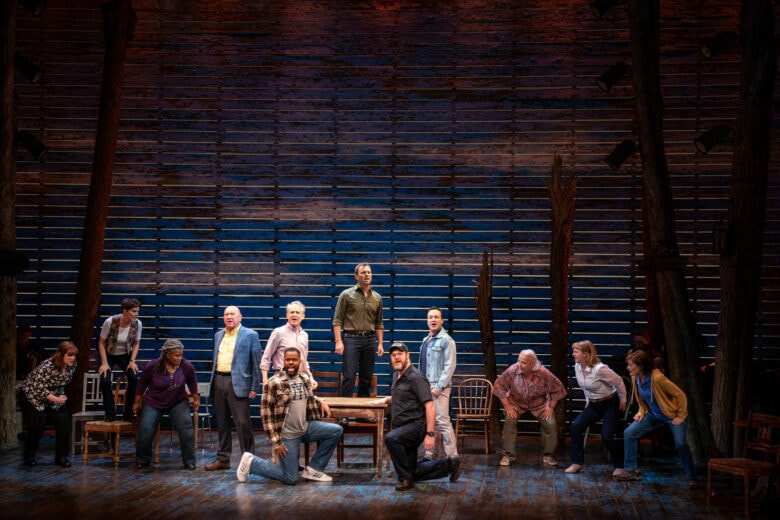 Hamilton creator Lin-Manuel Miranda is the unspoken underwriter of something like 40% of the content Apple TV+ buys or produces. He showed up in Dear…. And Central Park is stuffed with Hamilton cast members and genetically similar songs. And then there was all the Miranda worship on Little Voice.

Everything Apple TV+ does with even a hint of musicality exists in his shadow. Come From Away is something of a borderline case. (I mean not really — Apple obviously bought this because the Hamilton concert film did such great numbers for Disney+).

This show was written in 2013 as part of the neo-Broadway renaissance (look out for the Dear Evan Hansen movie). However, it didn’t make it to Broadway until 2017, at which point it became a sensation. (It’s the longest-running Canadian production on Broadway.)

Of all the shows from that movement, Come From Away stands out. It’s less objectionable than Hamilton’s rosy depiction of slave owners, but there is nevertheless something pretty tacky about a nice musical about 9/11 and how people are charmed by the small-town folk of Gander. (They all have so much in common!)

There isn’t much in this you couldn’t picture from the phrase “sardonic Celtic-Canadian 9/11 musical” — as truly “uhh … sure?” as that sounds. I loathed Hamilton like a nerd hates the high school bully and vice versa; this is fine.

The other reason Apple TV+ acquired this show is obviously because we’re approaching the 20th anniversary of 9/11. To counterbalance the truly evil 9/11: Inside the President’s War Room — the closest thing to a Fox News-approved documentary you’re ever going to find — Apple bought this to lighten the mood.

Come From Away serves as a gentle reminder of people banding together to survive tragedy. 9/11: Inside the President’s War Room, on the other hand, is a reminder that if you’re powerful you’ll live long enough to spin a fable about your own bravery in the face of a colossal foreign policy failure that resulted in a genocidal death count. You can at least tap your feet to this.

We have all kinds of people living here

The trouble I have with the new generation of musical-theater hits is that there just aren’t any surprises. I grew up in a different golden age, that of music theater parodies. From the Betty Ford and Planet of the Apes musicals on The Simpsons to the hunchback musical of The Critic, the dirty joke musical from Mr. Show and of course Waiting for Guffman — perhaps the definitive takedown of the musical theater personality — there were beautiful fake musicals everywhere.

And more than simply lampooning the shows of the creators’ youths (Cats, Phantom of the Opera, Jesus Christ Superstar) they perfected the kind of broadly appealing music that appeared in them. They were fake musicals but they also did the job of real musicals.

The problem I have is that since writers in the ’90s perfected the art of the fake musical … nothing was done to reckon with the fact that once something has been broken by parody, you can’t just pick it up and keep playing with it like it’s fully functioning.

That assertion, I recognize, is actually demonstrably false because all of these musicals post-Rent made huge cultural waves and won millions and millions of fans worldwide. But to me, to make a musical like Come From Away (which has a heartwarming scene where a gay couple realize everyone in the redneck bar has a gay relative) after Waiting for Guffman is just not good enough. The ruins of music theater are still smoldering from the 1990s. Business as usual just isn’t interesting.

Watch Come From Away on Apple TV+

Come From Away premieres on Apple TV+ on September 10.

Scout Tafoya is a film and TV critic, director and creator of the long-running video essay series The Unloved for RogerEbert.com. He has written for The Village Voice, Film Comment, The Los Angeles Review of Books and Nylon Magazine. He is the director of 25 feature films, and the author of more than 300 video essays, which can be found at Patreon.com/honorszombie.