It has an older CPU and skimpy RAM, but it is NOT underpowered. For users like me, who aren’t editing Hollywood movies, it’s more than adequate. Heck, it’s a huge leap forward. Like Jobs said at the launch, this is the future of notebooks. Extremely thin and light, yet capable of running dozens of applications without bogging down. There are compromises, of course, but the most important things — portability, durability and functionality — are very much in place.

Last year, I bought a 13-inch MacBook Pro, which I loved. But in comparison to the 11-inch Air, it looks like a bloated old relic. It’s positively primitive: a porky throwback to a previous computing era.

I know what you’re thinking, “Cult of Mac. This guy’s a zealot. He’ll buy anything Steve Jobs tells him too.” I admit, I’m a fan. But the Air is important. It’s different. It’s right up there with the iPad and the iPhone. This is a breakthrough product. 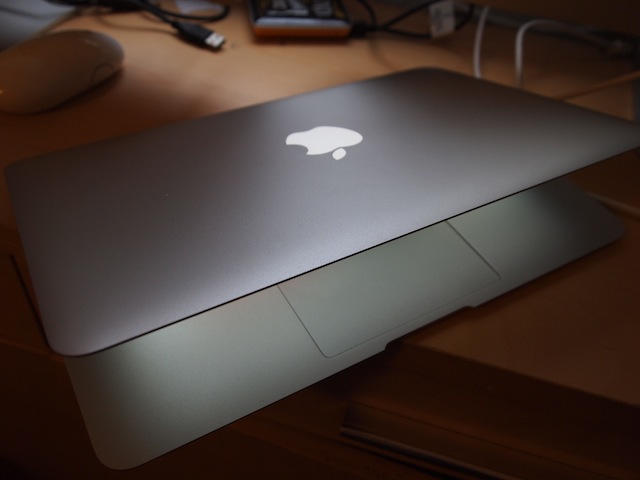 The biggest revelation about the 11-inch Air is its power. On paper, it looks weedy. Most people, us included, figured the processor is too slow and the RAM too little.

For reasons unexplained, Apple is using older Intel Core Duo chips (1.4GHz or 1.6GHz) instead of the latest i3 or i5 processors, which are found in the MacBook Pro.

It’s also skimpy on RAM. The base model has just 2Gbytes. Bumping it to 4-Gbytes costs an extra $100. The MacBook Pros can take up to 8GBytes.

I picked up the low-end model: 2GBytes of RAM; 1.4GHz chip and 64GBytes of storage. I thought it would be underpowered. Big shocker — it isn’t.

In an initial test, I opened up 17 applications and launched more 40 tabs in Safari and 24 tabs in Google’s Chrome browser (each is its own separate process). A funny thing happened: nothing. It kept on cranking. There were no spinning beachballs, no stuttering in the music I was playing.

I opened three more Safari windows and 40 more tabs. At this point the RAM was completely overloaded. The Air had carved out 1.76GBytes of drive space for virtual memory. Now the music started stuttering. But then it resumed.

This is in stark contrast to my MacBook Pro. When the RAM is full, it’s a beachball party until applications are quit or the machine is restarted. On the “underpowered” 11-inch toy computer MacBook Air, it was plain sailing.

In normal us, I often have a dozen or more apps open at the same time. I can easily have 50 or more tabs open in various browsers. It’s how I work, and it’s not changing. My Mac Pro at work is usually OK with this, and now my portable is too. Amazing that it’s half-an-inch thick. 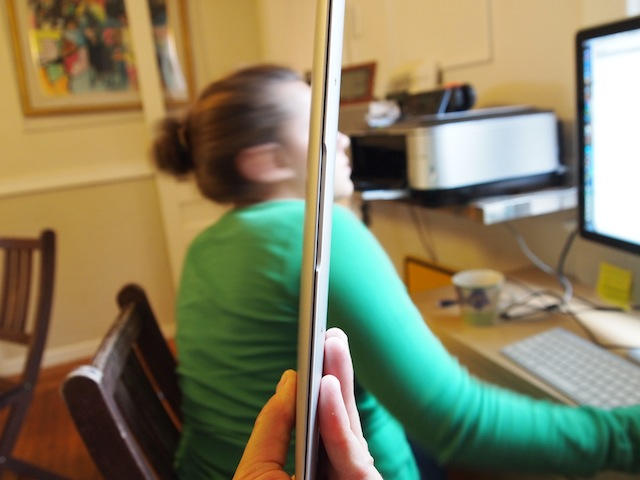 The build quality is superb. Hewn from a single slab of aluminum, the unibody case is extremely light and thin. It’s implausibly thin. It’s remarkable how such a wafer-thin machine isn’t fragile. And yet it’s not. It’s quite stiff and rigid. It doesn’t feel breakable at all.

It’s also very precise. Closing the lid is the notebook equivalent of a satisfying door clunk in a quality car: it closes with force and precision without snapping shut. It also takes just the slightest effort to open it. Not a lot, but just enough. When the lid’s open, it stays in place. This kind of engineering isn’t cheap. Who knows if the hinges will last. It’s a notorious weak spot on Apple’s laptops. Maybe it’ll break in six months. But for now, the hinges speaks to quality and design. It’s very well put together. 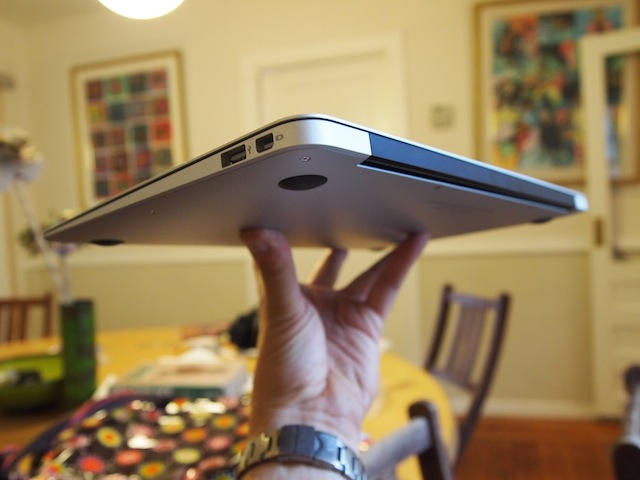 The machine’s as light as a feather and almost as thin as an iPhone. It weighs just 2.3lbs. It feels very, very light. It sits weightlessly in your lap. Holding it up, it feels as light as an iPad. I had to check the specs. The Air is actually 1lb heavier.

If it wasn’t 11-inches wide, it would easily slip into your jeans pocket. Compared to my old 13-inch MBP, it’s a like a piece of paper. Where the MBP becomes heavy in your backpack, you could tote the Air all day and it would be no more effort than wearing a wristwatch. 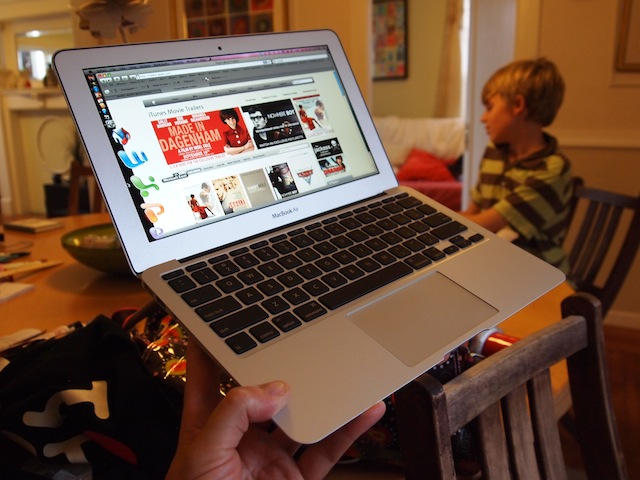 Most of the internal space is given over to a custom battery that Apple says lasts for 5 hours. I got more than 6 hours on both days over the weekend. I was using dozens of apps, running various tests, playing music and had Wi-Fi on. I did turn down the screen brightness to about 70%. Standby is supposed to be 30 days.

Weirdly, I’m a bit disappointed that it’s only 6 hours. I guess I was expecting more. I’ve been spoiled by the iPad. Still, six hours ain’t bad.

The Air uses NAND flash for storage; 64GB or 128GB — you have to make the choice when you buy the machine. The chips are soldered directly to the motherboard to save space: Apple dispensed with a standard Solid-State-Drive (SSD) enclosure. This means the memory can’t be upgraded at a later date (neither can the RAM).

Flash storage makes for an exceptionally fast machine. It cold boots in about 14 seconds. Safari is instant on. Websites load in a jiffy, even when you launch a dozen tabs simultaneously. iTunes takes about 1.5 seconds to launch. I haven’t had a chance to a chance to do any complex image editing, but simple transformations in Preview and iPhoto were instantaneous.

The lack of storage may be a problem. My old MacBook pro has a 160Gbyte drive and I’ve used 145Gbytes, mostly for my iPhoto library. Guess I’d better get an external USB 2 drive and get used to streaming. 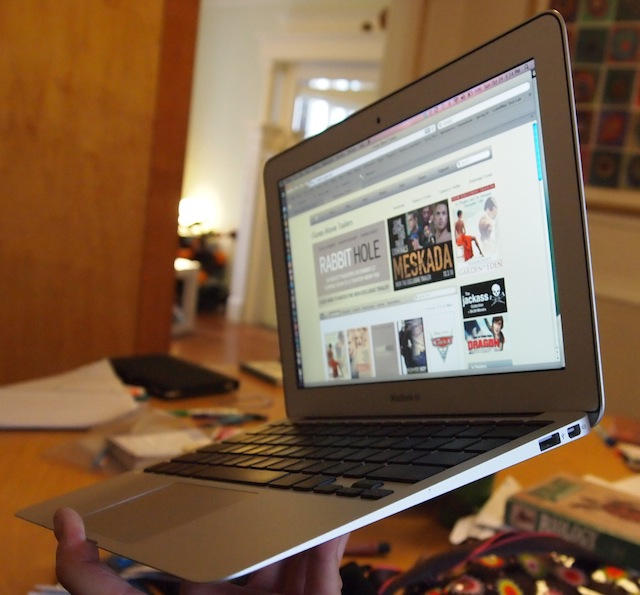 The screen is very nice. It has a 16:9 widescreen aspect ratio, and more or less the same resolution (1366 x 768) as a 13-inch MacBook Pro. (The 13-inch Air has the same screen resolution as the 15-inch MBP). It’s glossy, which some people hate, but I don’t mind. I moved the Dock to the left-hand side to give the screen more vertical space. Because of the higher resolution, everything’s smaller. This may be an issue for older users, but of course, the resolution is easily adjusted down.

I hooked the Air to a 27-inch iMac using a DisplayPort cable, and the iMac transformed into a large external monitor. I played a HD movie trailer on the big screen while playing a HD Netflix movie on the main 11-inch screen. In the background, a dozen apps were open. Not a hiccup. Who said the Air is underpowered?

In the lid there’s the standard iSight camera, which has now been rebranded as the “FaceTime camera.” It’s even thinner than the camera on iPhone 4, allowing it to be built into the wafer-thin lid. 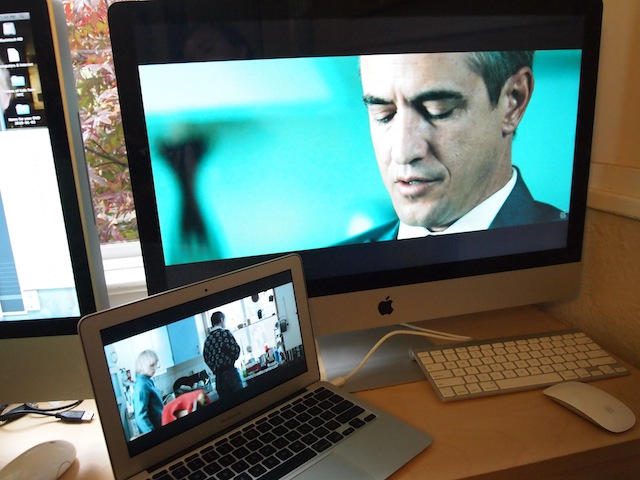 SLOTS and DVD DRIVE (LACK OF)

Again, people have complained about the lack of an optical drive. But I can’t see that it’s needed. I loaded the machine up with all the software I need from the net. It has USB for a thumb drive. If you need a CD or DVD drive, it’s going to be a once-a-year — maybe.

The keyboard is full size and uses the same Chicklet keys as the Pro line. A full-size keyboard don’t seem like a big deal, but it is. We have an older Windows netbook in the house with a three-quarter keyboard. Everyone hates it, even the kids, who keep hitting the wrong keys. It’s impossible to work on. It drives you nuts.

There’s an oversized, multitouch trackpad — the same as those in the MBP. It’s roomy, responsive and functional. 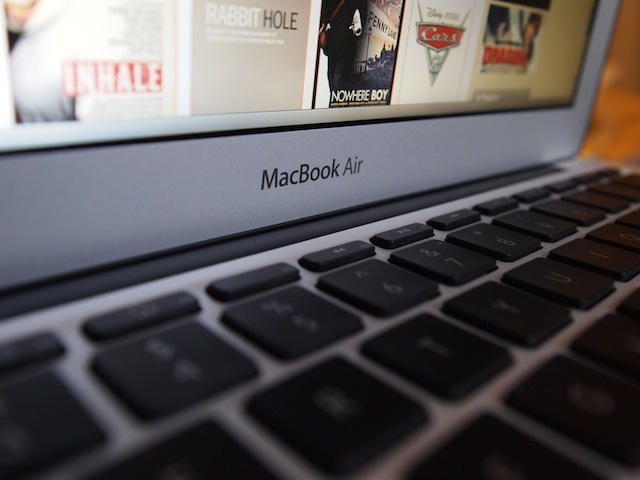 Adobe Flash is no longer pre-installed. By coincidence, YouTube was the first site I visited after pulling the Air from its box. The second site I visited was Adobe’s Flash download page. Flash may be a bane, but it’s still big part of the Web ecosystem.

There’s no SD card reader on the 11-inch model.

There’s no security slot: This machine could easily go walkies at a coffee shop.

There’s no backlit keyboard, which is a bummer. I love the backlit keyboard on the MacBook Pro. For bedtime computing, it’s a lifesaver. I’ll have to revert to my old habit of tipping the screen down to illuminate the keyboard.

RAM and Flash storage are soldered to the motherboard; later upgrades won’t be easy. I think the low-end model is perfectly adequate, but it may be best to future-proof and maximize now for $300 extra. Of course, this makes a relatively affordable $999 computer a $1,200 computer. 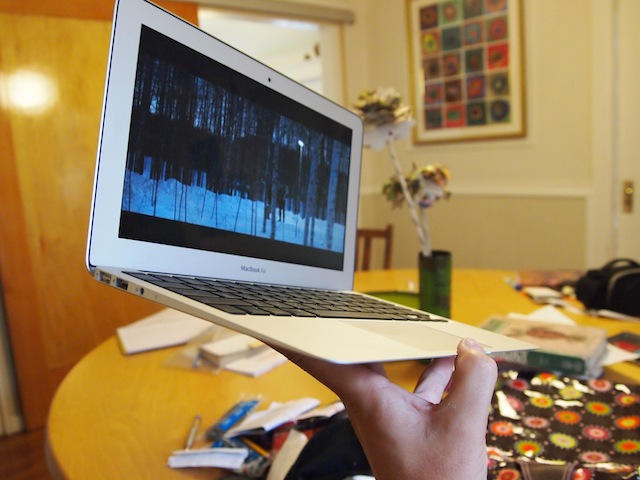 The MacBook Air is a polarizing machine. Many critics, especially in the tech community, say it doesn’t do this or that. It doesn’t have a DVD drive. It doesn’t have FireWire or Ethernet. It’s not powerful enough.

But for the vast majority of consumers, it is powerful enough. And its compromises — the lack of an optical drive, for example — are irrelevant. If you haven’t moved on from optical media, you soon will be. It’s a streaming world these days.

At the rollout event, Jobs said: “‘We asked ourselves, ‘What would happen if a MacBook and an iPad hooked up?’ Well, this is the result. … We think it’s the future of notebooks.”

Jobs is right. This machine is suitable for a wide swath of Apple’s customers. In 2008, the first MacBook Air was a high-design machine aimed at a narrow slice of the market. It was style over substance — a machine for reception desks at art galleries.

But the new Air is a mainstream machine. It’s suitable for students to take to classes all day, or a businessperson attending a week-long conference. For an information worker like me, it could be a main work machine. I can run my business on this.

This is what Apple does best: driving high-end technology down the line and superseding old products with better new ones.

This is the future of notebooks. The 11-inch Air blends extreme portability with surprising power. Starting at $999, it’s priced to sell. 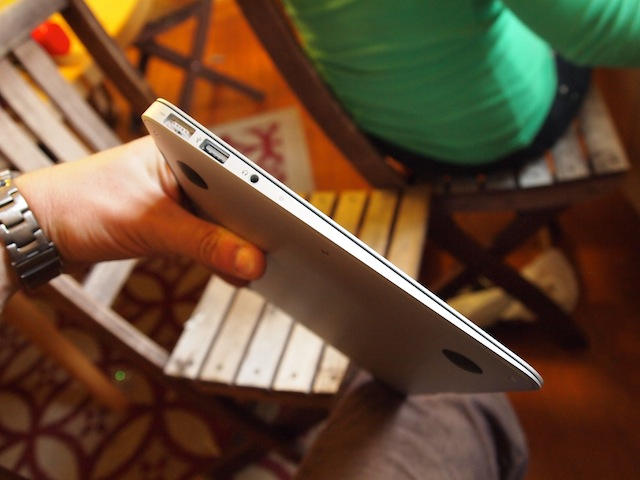 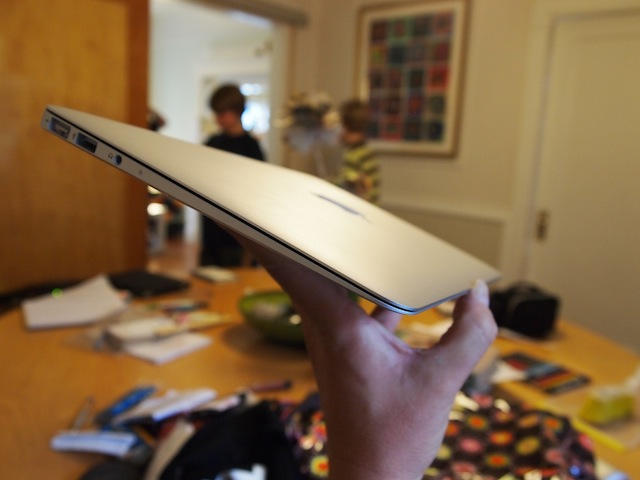 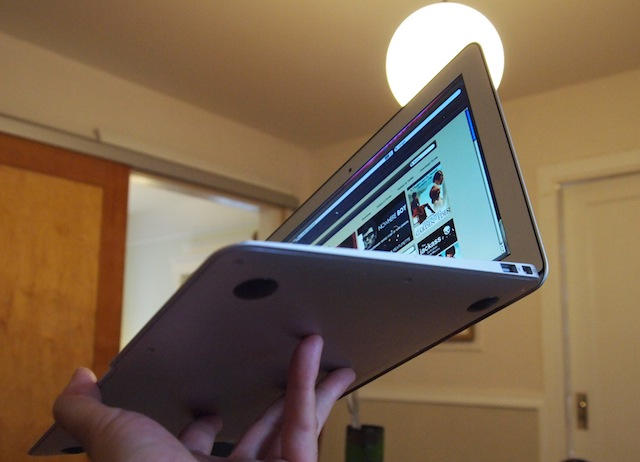 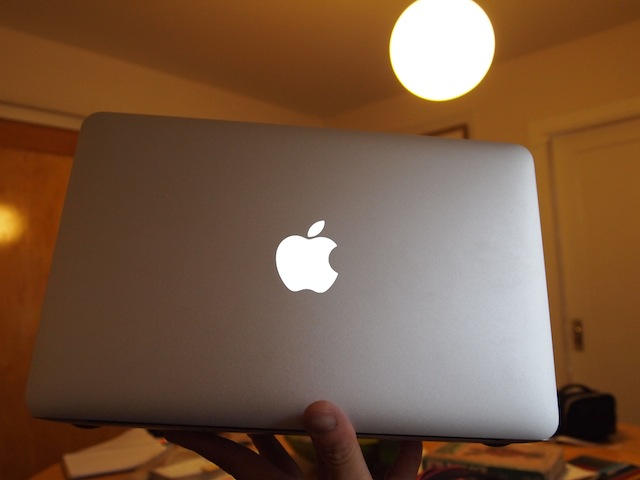 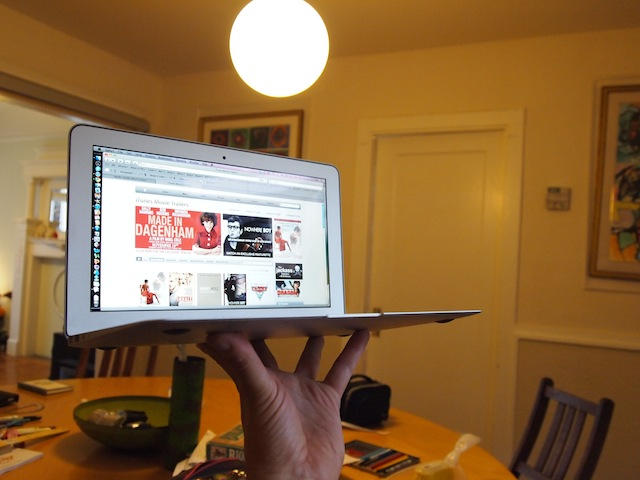 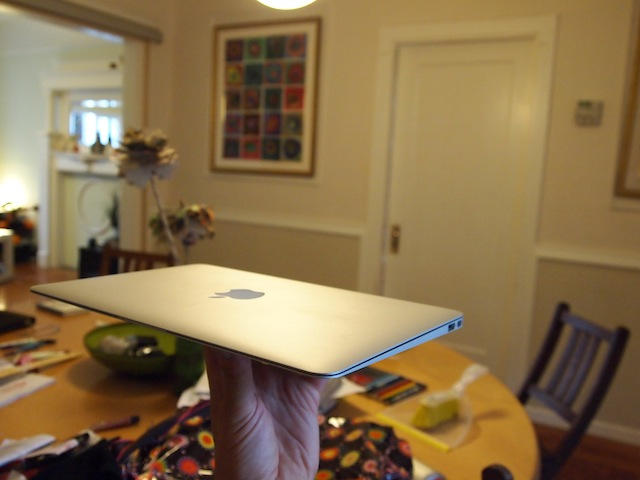 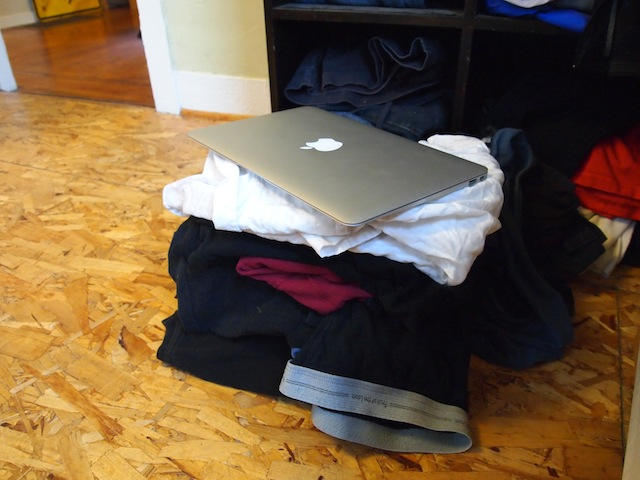