Newest iPhone 12 rumor hints at 4 new models, including ’12 mini’
Today in Apple history: Apple moves into Bandley 1, its first custom HQ
A decade ago, iPad blindsided Windows team
Mount your iPhone 11 anywhere with Xvida’s amazing magnetic cases
5 big questions heading into Apple’s first earnings report of 2020
Buying MGM could prove crucial to Apple TV+ growth
How to switch off iCloud backups, and why you might not want to
10 years on: How the iPad changed mobile computing
Apple teases Beastie Boys Story ahead of April debut
Keep digital distractions at bay to stay productive [Deals]

As I noted the other day, I recently completed a near-endless trip around the world, and I used my iPad for pretty much everything while on the plane. And the more I think about it, the more it’s clear to me that I will never again go on vacation with a laptop.

Here are my top 10 reasons why:

10. Though heavy, iPads weigh less than any hardcover and most paperbacks.
A lot of people, me included, spend a lot of time whining about how heavy the iPad is. But at 1.5 pounds, it’s a lot lighter than any edition of every single book in Oprah’s club.

9. Endless battery life makes a lack of power outlets irrelevant.
Whether with my iPhone or my MacBook, I can’t count the number of times that I’ve started watching a movie on a plane only have the power give out partway through. I seriously can’t imagine how that would ever happen with an iPad. Depending on the task, I’ve gotten well over two hours of battery life after getting the 20 percent warning.

8. It’s the mobile video game system of the future — to-DAY!
Whether playing “Chaos Rings,” “Angry Birds HD,” “GTA: Chinatown Wars”, or “Pinball HD,” I cannot say enough for handheld gaming that doesn’t require you to squint. Or use a mouse.

7. Instant-on means maximum useful time while on the plane.
On any flight, but especially on short flights, there’s nothing worse than losing out on fun or production because of a long wait until approved electronics use followed by an incredibly long startup time on a fully powered-down laptop. For whatever reason, flight attendants assume a black-screened iPad is turned off, so it’s a snap to get up and running quickly once you’re allowed to use electronics.

6. With the right stand, you can still share a movie with a seatmate. 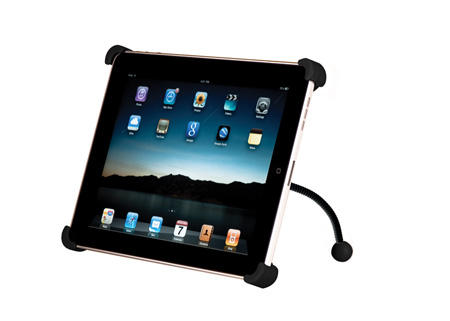 I really like the M-Edge FlexStand to turn an iPad into the best social video player on the market (provided you get a cheapo audio splitter, of course).

5. You can fall asleep reading with it without much worry.
It’s a lot less bad to roll over onto an unused iPad in your sleep than to do the same to an open laptop. This one’s embarrassing, but I’m living proof that it matters.

4. The screen is terrible in the sun, but still better for the beach than a Macbook.
It would be nice if Apple would roll something transflective out some time soon, though…

3. It’s significantly easier to slip in and out of a bag than a magazine, book, or laptop.
The iPad’s tapered bottom just has a way of magically finding space in a packed shoulder bag that I can never find with a laptop and that results in magazines getting their covers ripped off. There’s nothing easier at the size.

2. Comic books were meant to be read on multitouch tablets. Seriously.
I could talk about how much space I saved in my luggage by leaving the graphic novels I most wanted to read at home, but that’s a lot less important than how intimate and immediate it is to read a comic book on an iPad. The screen is just a touch smaller than a standard-size comics page, and it’s completely amazing to zoom in close on something you want a better look at.

1. Doing work is hard enough that I stick to what’s actually important.
To my immortal shame, I can be somewhat of a workaholic. It’s really hard not to do some writing that could wait until my return, answer e-mails, or make phone calls that no one I work with would expect me to take on. The great news is that, lacking a physical keyboard and a non-ugly Skype client, I only do work on the iPad if it actually matters — it’s just too inelegant to write more than one 1,000-word e-mail per day.