Even if you take good care of your new MacBook Air, there’s always a small chance something could go wrong. But it is a lot easier for Apple and its Authorized Service Providers to fix the new ultraportable than other Apple notebooks.

A new teardown reveals all the changes Apple has made to make swapping components simpler.

When we spend thousands on Apple devices, we’ll do whatever we can to protect them. iFixit does the opposite. As soon as they arrive, it pulls them apart in the name of science. The brand new MacBook Air is the latest to hit its operating table.

Before making its way inside the MacBook Air, iFixit pulled off one of its keys to confirm that the new machine has the same improved butterfly keyboard as the refreshed MacBook Pro. The third-generation has a silicone membrane that prevents debris from getting inside.

After removing the MacBook Air’s base, secured in place with Apple’s familiar pentalobe screws, iFixit discovered the machine’s tiny logic board. It’s cooled by a single fan and a “radiator-esque heat sink,” and flanked by large speakers.

The logic board is home to the MacBook Air’s quad-core Intel processor, a new T2 security chip that powers things like Touch ID and audio, 128GB of flash storage manufactured by SanDisk, and 8GB of LPDDR3 RAM from SK Hynix. None of this is removable.

MacBook Air is easier to repair

Other things are removable and easier to repair, however. The MacBook Air’s two USB-C ports are separate from the logic board and can be replaced on their own, as can the Touch ID sensor and larger trackpad.

iFixit confirms what we learned earlier about the new MacBook Air’s battery: It is glued in place, but Apple uses strips that can be removed (like those in the iPhone) so that the battery can be replaced without the need for a new top case. 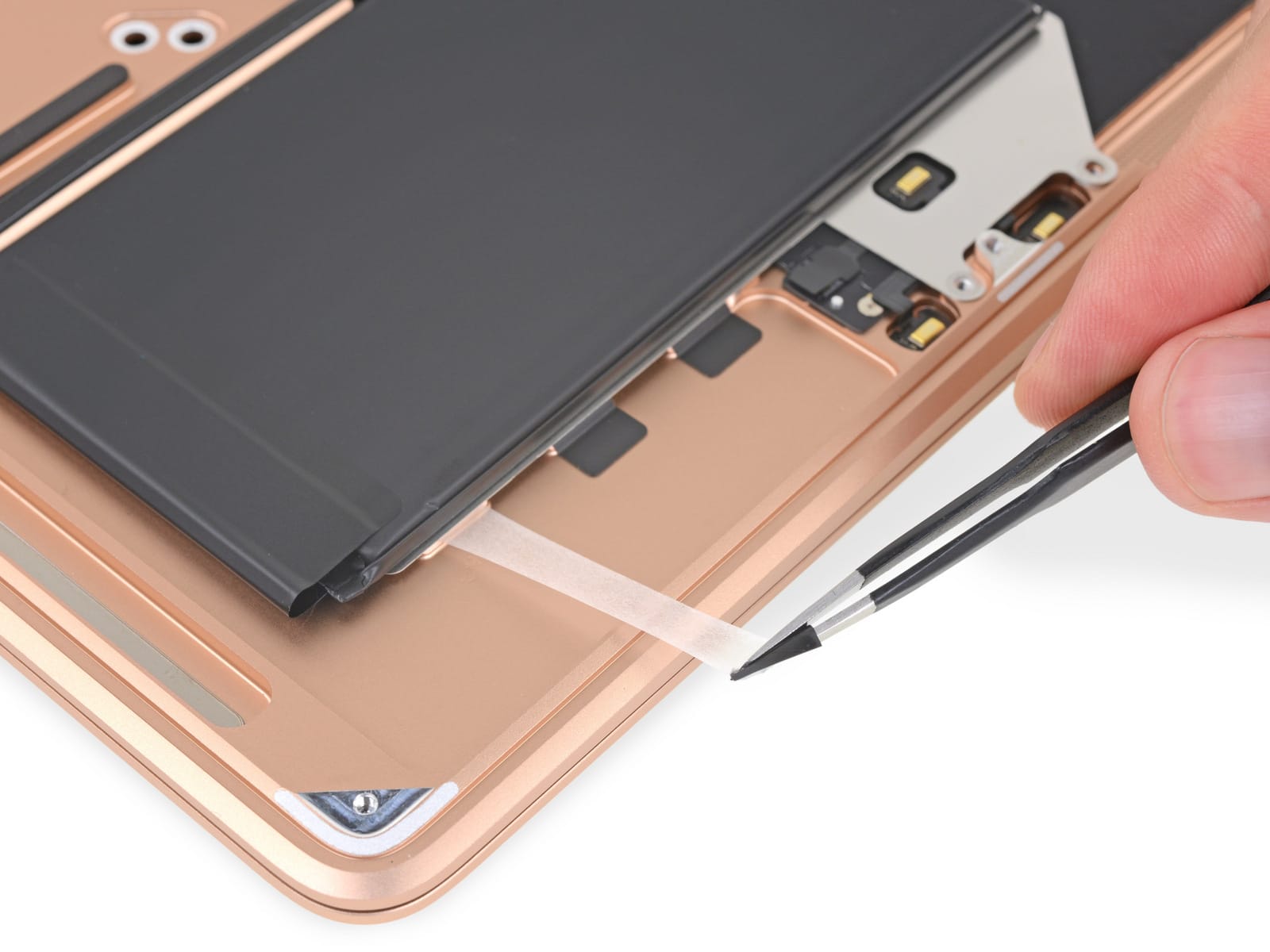 iFixit awards the 2018 MacBook Air a score of 3/10 for repairability. That means it’s still not easy to pull apart and fix, but compared to other Apple products, it does offer more flexibility. This should make repairs carried out by Apple faster and more affordable.

“The Air still uses external pentalobes to keep you out, requires lots of component removal for common fixes, and both RAM and storage are soldered to the logic board,” explains iFixit. “All together, that means Apple has an easy time with their knowledge and tools, but the average DIYer is left out to dry when it comes to upgrades.”