Paper Toss for iPhone is a brilliant pick-up-and-play game that is guaranteed to kill some time when you’re waiting for your train, when your boss is out of the office, or when you’re waiting for your little ones to give up the TV. If you’re one of the 21,000,000 paper tossers out there, you’ll be pleased to know the game is now available on the iPad, including a new level and improved visuals for the larger screen. But is it worth that $2.99 price tag?

If you haven’t played Paper Toss before, it’s a really simple game in which you throw screwed-up balls of paper in to a small trash can. A nearby desk fan will create some wind so you must angle your throws to take the wind speed in to account. The aim is to get as many shots as you can on target to get a high score, and there’s an online scoreboard to compete for the highest score worldwide.

You will soon find yourself addicted to trying over and over again to beat your own high score. Unfortunately I found that novelty wears off rather quickly and it becomes one of those little games you’ll load up every now again for a quick play while you’ve got a few minutes to kill. 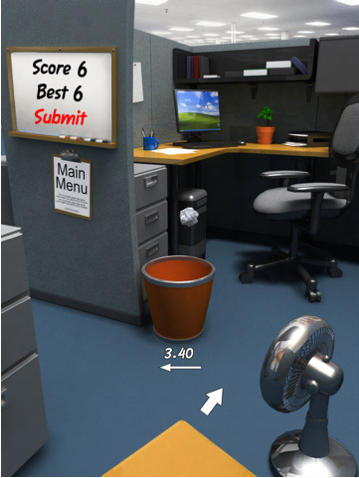 So does the iPad version come packed with features and improvements to refuel that addiction? Well… sadly no. There is one new ‘pub’ level, and the visuals have certainly been improved for the larger screen and higher resolution, however other than that, it’s the same game you can download on to your iPhone for free.

Paper Toss is a fun game and I’d hate to discourage anyone to give it a go, but until an improvement has been made to the iPad version with the introduction of some significant new features, I’d advise you to hold on to your cash.

Paper Toss is made by Backflip Studios – you can find the iPad version here, and the iPhone version here.