I’m fairly well-known for being a detractor of the convoluted mess that iTunes has become in the video and apps iPhone era. I might have even labeled it Apple’s own IE 6 at some point. That’s actually not true — it’s more Lotus Notes, trying to fit every possible feature into a single application rather than writing a bunch of specialized programs that excel at their task. From a desktop experience perspective, at least, I know I would be way happier with discrete applications for a slimmed-down music player, video player, and store/file manager.

Well, I might have found the first of that set. It’s called Instinctiv, and it’s a gorgeous, free, Mac OS X exclusive music player that actually makes listening to music on a computer intuitive again. It has some shortcomings, which I’ll address, but on most levels, it’s a superior music solution to iTunes.

Getting down to the bare bones

When you really come down to it, there’s not a lot any of us want to do with music on our computers. We want to listen to music,  quickly find the song or artist we’re looking for, shuffle songs when we’re not sure what we want to hear, import new music, and sync it to portable devices. Instinctiv is great on the first few and most of the way there on the rest.

Getting started is a snap — just point to your iTunes library, and it imports all of it and even syncs to it, matching any additions as you continue to add music. The interface is equally elegant. It’s very simple: five tabs for Search, Library, Shuffle, Sync, and Tickets (you can buy concert tickets for your area based on who you listen to frequently — it’s a neat feature). Search is a very straightforward interface, showing all songs alphabetically, and an empty bar to enter queries for. It’s all Spotlight-based, and it’s lightning fast. Songs filter and reorder as you type. It’s just delightful. 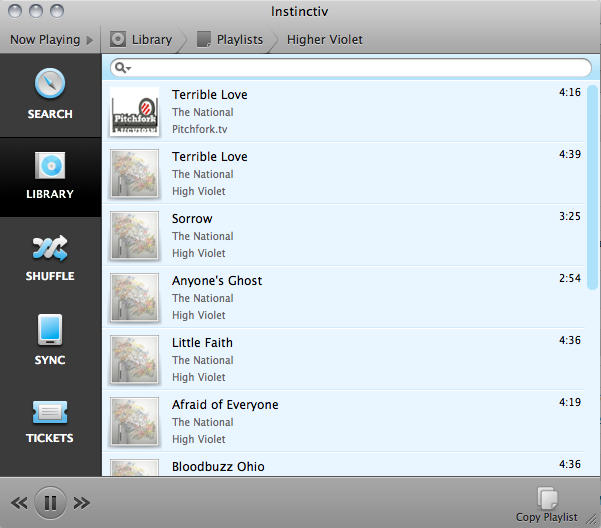 Library is equally nice. You’re presented with four ways to browse: Songs, Artists, Albums, and Playlists. Clicking on one uses a nice animation to present you with searchable hierarchical views. The top bar creates a clickable breadcrumb trail to return to previous steps as you negotiate your library.  It’s all pretty standard functionality — but really well-executed. I find myself especially enjoying that everything is activated with a single click; no iTunes-style double-clicks to start playing music here. 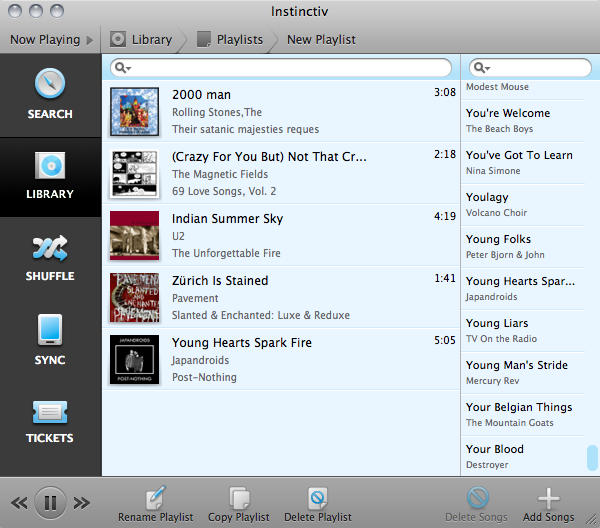 And the playlist interface is brilliant — it simply mocks iTunes. Rather than requiring you to select and drag the songs you want into a tiny, easy-to-miss playlist icon running down the left side of the library pane, as iTunes does, Instinctiv uses a nice, two-pane interface that allows you to drag your songs into the largest part of the window. The sub-pane at right provides easy access to every song in the library and is as searchable as the rest of it.

Shuffle also works elegantly. It offers three options: Instinctiv Shuffle, Play Songs Similar To…, and Random Shuffle. The first is a pretty basic function, but done well. It doesn’t offer multiple songs from the same artist or album, as iTunes still does. The second is just like Genius, but it doesn’t generate the same playlist, give or take a few songs, the way that Genius does. And Random Shuffle is as advertised, which allows anything to pop up. It’s not as nice, but I appreciate the willingness to present more options.

On the importing front, it’s not quite so nice a picture. Instinctiv, though it supports more than 50 audio formats, including FLAC and Apple Lossless, is dependent on other programs to do its importing. You can start importing from within it, but it will launch iTunes or a similar program to handle the actual low-level work. Which is fine, but it’s a reminder that it’s not a totally baked solution.

Syncing is perhaps the most frustrating aspect. Though the team behind Instinctiv has built in support for all kinds of devices, including Blackberries, Symbian phones, Android, and Windows Mobile, it naturally can’t sync iPods or iPhones — Apple doesn’t allow it. But their hands are tied.

Despite a few small shortcomings, Instinctiv is great. It should be considered as a desktop Mac OS X music player, and it wins on nearly every level from that perspective. It masks complexity, keeps it simple and makes all kinds of clever UI decisions to make it feel truly Mac-like. And it’s so nice to not see another long library list like the default iTunes view since 1.0 and actually have it work better.

The next version of iTunes will doubtlessly be announced next week at WWDC alongside the next iPhone. And all the word is about cloud-based streaming. It would be nice if the actual desktop experience got more like Instinctiv in the process.

Instinctiv is a simple, effective, and fun music player for Mac OS X that bests iTunes in (almost) every regard.
[xrr rating=4/5]