If Tim Cook ever parts with Apple, his resume for becoming a politician is looking pretty strong.

Not only has Cook become one of the most prominent campaigners for human rights and environmentalism in corporate America, he also just scored some legit political cred by getting as many votes in the New Hampshire GOP primary as former 2016 presidential candidate Bobby Jindal … kind of. 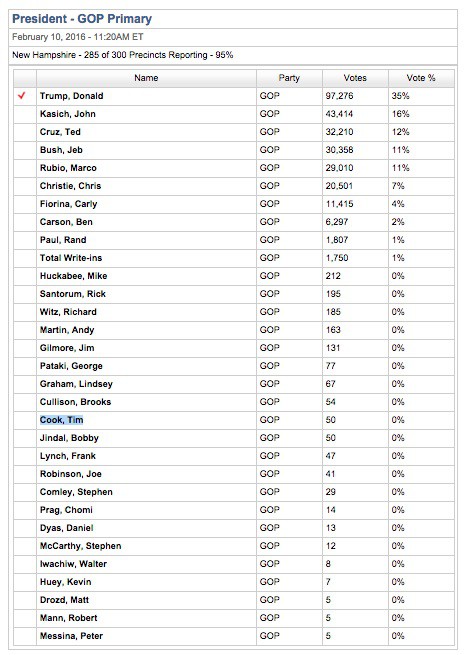 “Tim Cook” and Bobby Jindal both received 50 votes each, according to the most recent poll data from New Hampshire primary, which saw Donald Trump winning the contest. Unfortunately, those weren’t write-in ballots in favor of the CEO of Apple taking over the White House (though we wouldn’t be opposed).

The Tim Cook running for president is from North Carolina and only managed to get himself on the ballot in a handful of states. While Apple CEO Tim Cook is known for his progressive ideas, presidential Cook is a Christian conservative who boasts that he beat Hillary Clinton in his own Twitter poll and claims the Holocaust was caused by gun control.

If you don’t remember who Bobby Jindal is, we don’t blame you. He was the third candidate to drop out of this year’s crowded GOP field. The highlight of his campaign was having Aziz Ansari impersonate him on Jimmy Fallon’s show.