Apple’s always on the lookout for ways to improve the resiliency of its devices. For this reason, the U.S. Patent and Trademarks Office today published a new patent application from the company — calling for retractable drop-proof bumpers to be built into future iPhone housing, capable of doubling as a flotation device in case your handset accidentally lands in water. 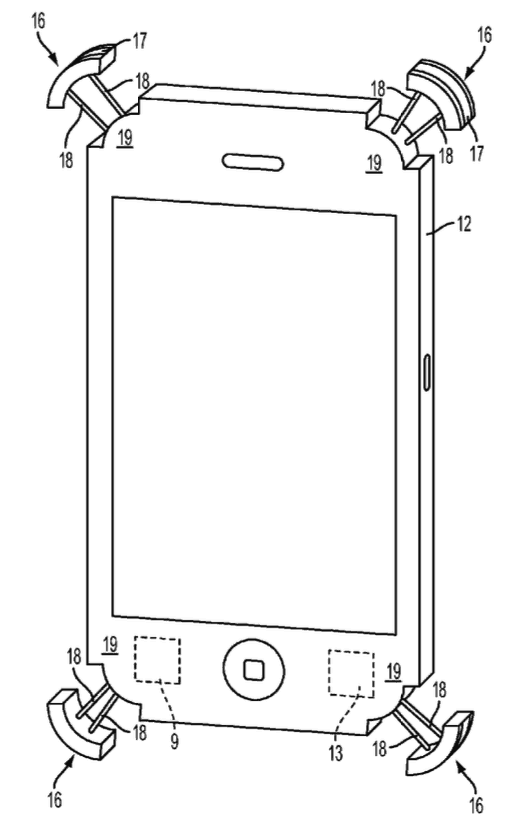 The idea is that the four corners of your iPhone would spring out in the event that you dropped it, thereby lessening the impact of a fall. Most impressive is the fact that your iPhone’s accelerometer would be able to tell the premise moment your iPhone tumbled from your hand, due to its ability to sense a sudden change in movement.

“Because an accelerometer senses acceleration due to movement and gravity, the angle at which a device incorporating an accelerometer can be determined. Accelerometers are increasingly being incorporated into personal electronic devices to detect the orientation of the device, or portions of a device such as, for example, a display screen. The motion and angle of the device is noted by the sensors or a processing unit receiving information from the sensors, so the device can know the orientation of the screen with respect to a gravity vector.”

Instead of tilting the screen, however, in this case the iPhone’s accelerometer would trigger the deployment of the described mini shock-absorbers to protect your phone. These same shock absorbers would also allow the iPhone to float if dropped into water.

As the application explains, “by enabling the device to float, it is prevented from sinking to the bottom of a lake, ocean or other turbid waters where retrieval may be problematic.”

Would this be useful? Absolutely. Could I see it happening? Based on the equally convoluted and James Bondian anti-drop inventions Apple’s patented over the years, I’m going to say probably not. Sadly.