What it is: We Rule is an addictive world-building iPhone game that blends Sim City with Facebook’s Farmville. Set in medieval times, you must build a prosperous kingdom by micromanaging the peasants and expanding trade with other online players.

Why it’s good: The game blends the best empire-building aspects of Sim City with the social aspects of Farmville.

As a teenager, I was totally addicted to games like Sid Meier’s Civilization, and Sim City. Even though they had terrible graphics and long load times on my old Pentium 1 PC, the sense of being a ‘god’ and having power over all those little guys made it a deep and immersive experience. Now Ngmoco has brought this gaming experience to the iPhone.

We Rule is like Zynga’s wildly-popular Farmville game (available on Facebook) but on steroids. Instead of just growing crops and building fences, you build a kingdom and rule over your subjects. At the moment is only one other similar app – Tap Farm, by Street View Labs. Ngmoco has a proven track record with titles like Rolando, Topple, Eliminate and Touch Pets, and We Rule doesn’t disappoint. 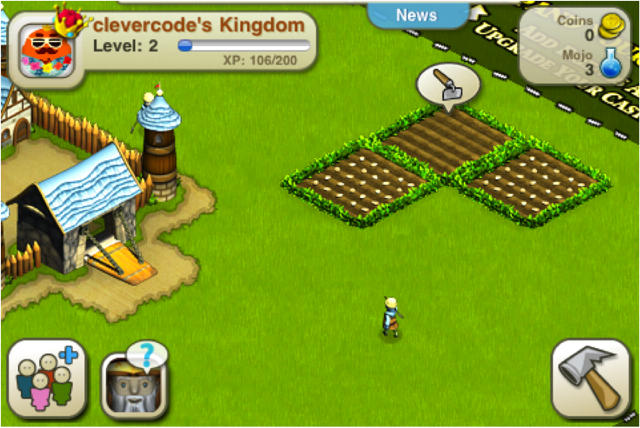 The game has a brilliant feel to it and is very quick to unlock enough items to keep you satisfied. The load times are quick and the menus clearly laid out.

Don’t expect an engrossing storyline in the game; it is very simple with a limited number of characters and little interaction. You plant crops to generate income. I actually like this aspect of it; often simple games like this can be lost to endless hours of cut scenes and mediocre quests for minimal gain.

What you see is what you get here. Plant seed, harvest crops, gain gold and XP, plant or grow again.

The game works in real time, so when you plant a crop or build something there is a wait time, which is different for every item in the game. Planting corn only takes 45 seconds, whereas onions need an hour to grow.

If you, like me, have to work for a living, you will unlikely be able to sit in front of the game 24/7. The developers make this work by using their servers to keep the game running even when you are not actually playing it.

In theory, you are then presented with a push notification telling you that your onions are ready to be harvested!

However, every time I have tried this system, the notification failed and I logged in on to find a pile of dead onions, which is no good to anyone. This can be infuriating as it takes time to build up gold, only then to waste it in one fell swoop.

I’m hoping this is an isolated instance and that the issue is sorted swiftly. If not, prepare for the baying mob!

The two currencies used in the game are gold – needed to buy seeds and buildings, etc. – and Mojo, which you use to speed up the buying process.

Every time you level up, you get Mojo and a little cash too, along with the standard experience point system that rewards you with XP, and the unlocking of items and activities when you reach a certain level. To advance quicker in the game, you can buy Mojo in-app, ranging in price from $1 to $50.

The great thing about We Rule is that you don’t need to buy Mojo to play the game but you can use it to hasten progression through the game. It’s your choice. Mojo is a shortcut through the game, so to speak. 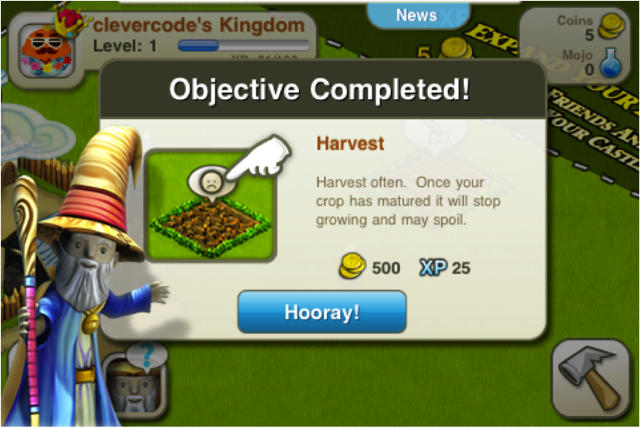 The biggest letdown of the game is the social interaction. It promises a lot, but on the less popular +plus network, it struggles to deliver. The premise of the network is that you can expand your map by adding friends and trading goods between kingdoms.

All this is fine in theory, but in practice, out of the 300 or so contacts I have on my iPhone, only one was on the +plus network and he doesn’t play We Rule. A much better way to build this would be to link your Twitter or Facebook account to the game and search them for friends.

Apps such as Foursquare and Gowalla do this very well and I don’t see it as being a difficult thing to build into the software. Hopefully future updates will add this ability.

Overall, We Rule is a good game. It has a fun and innovative feature set and has the potential to be truly great, but until the social connectivity is sorted I think it will stay mediocre.

That said the game is available for free, and at that bargain price who are we to really complain?

Where to get it: We Rule is available for free from the App Store.