Imagine cruising low around South Africa in your small plane at 105 knots. You’re enjoying the scenery below when all the sudden your plane’s canopy pops open just wide enough to send your bag with a MacBook Air plummeting 1,000 feet to its death.

That’s exactly what happened to one pilot, only lucky for him, the MacBook Air miraculously survived. Redditor av80r posted pictures of his still-functioning MacBook Air after it fell out of his plane mid-flight. According to his story, the farmer who found it claims he heard a whistling sound. He looked up and saw a bag hurtling towards him and took one step to the left and watched it land near where he was standing.

Despite the crash landing, the MacBook Air still works. Although the cooling system is damaged and the glass on the trackpad was busted into a million fragments, the display is hanging on like a champion.

Here’s a view from the side: 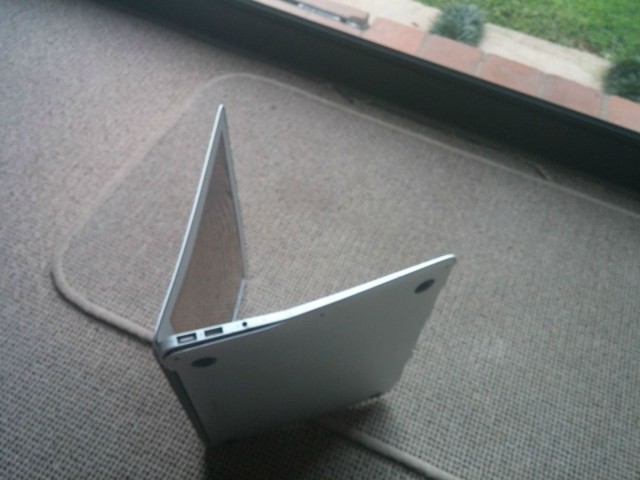 The bag with the MacBook also contained the pilot’s license and fligh tbook. Malopo, the farmer who found it, looked him up Facebook and found his number to return the equipment.

After recovering his MacBook, the pilot says he actually took it down to his local Apple Store to trade it in. “They didn’t think it was funny as I did apparently.”