Your iPhone can make payments, control your smart home, and track your health — and soon it might be able to control your car, as well.

A new patent published Thursday describes a way of using the iPhone’s geo-location capabilities to intelligently monitor and control certain car functions, based on “geofences.”

Likely pairing with Apple’s vehicle-based OS, CarPlay, the patent notes how your car could be tracked in relation to your iPhone — with appropriate signals, sent using Bluetooth LE, to execute functions like locking your car and arming its alarm when you are a certain distance from the vehicle.

In another variation it would be possible for your car to be alerted when you are five minutes away, at which point it could send a signal to heat the car’s cabin in anticipation of your arrival.

The patent also notes how different geofences could be set up with different boundaries, so that while approaching your car could unlock it, moving toward its rear while carrying an iPhone could automatically pop the trunk. The technology would additionally make other safety-conscious functionality possible, such as not allowing the vehicle’s engine to be started until the iPhone owner is sitting in the driver’s seat.

Apple first filed the car remote patent back in June 2012, crediting Sylvain Louboutin as its inventor. ABI Research has estimated that Apple’s CarPlay system could land in a massive 24 million vehicles by 2019, meaning that today’s patent could be tomorrow’s mass-market technology. 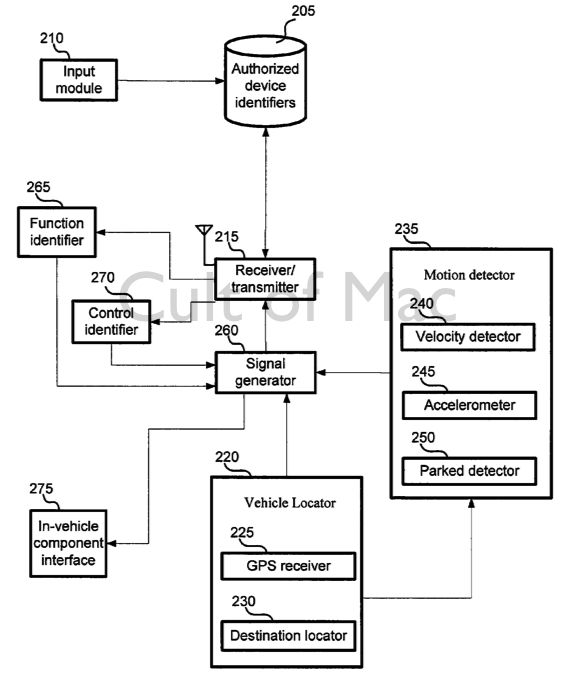