iPhone 6 and 6 Plus preorders have already started selling out around the world and the shipping dates are slipping.

Spokes people for Apple say that they’re seeing an unprecedented demand for the new phones already, and carriers like AT&T are getting crushed by the unfathomable number of customers looking for an upgrade.

“Demand for the new iPhones is higher than that seen in either of the past two years,” a carrier spokesperson told Recode. Shipping estimates for the larger 6 Plus slipped to 3-4 weeks within hours of preorders becoming available last night. Most 4.7-inch iPhone 6 models haven’t been delayed yet.

“It’s amazing to see the volume,” he said, adding that the “systems are rocking” and  “everything is going well.” He said demand for the new phones is “better than last year and they’re better than the prior year [before that].”

“Every time there is a change in [iPhone] design, there’s an uptake,” he said. “I think this design is particularly good.”

Apple also issued a statement saying, “Response to iPhone 6 and iPhone 6 Plus has been incredible with a record number of preorders overnight.” No specific numbers were provided.

To deal with demand, Apple has been giving out reservation numbers to preorder customers that are redeemable when initial orders are ready to process. The company is currently emailing instructions with steps to complete purchases that were started through its website. 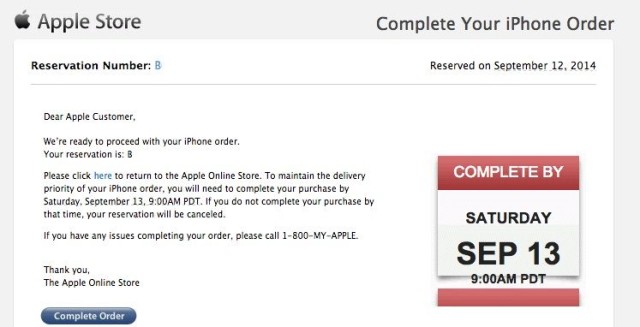