The drive toward mobile health has seen more and more research into the possible medical applications of smartphones. The latest comes from a team of researchers at the University of Washington, who have developed an app capable of diagnosing jaundice in infants simply by taking their picture.

If untreated, severe jaundice can cause brain damage along with a potentially fatal condition called kernicterus. Since it is typically diagnosed by a yellowing of the skin, the iPhone app — called Bilicam — asks users to place a color calibration card on the baby’s stomach, which helps the software to work out lighting and flash conditions, then snap a photo, which is uploaded to the cloud for analysis.

Analysis is carried out by an algorithm, which provides results almost instantly — and could well be used in hospitals as a screening tool to determine whether infants need to take any further blood tests. 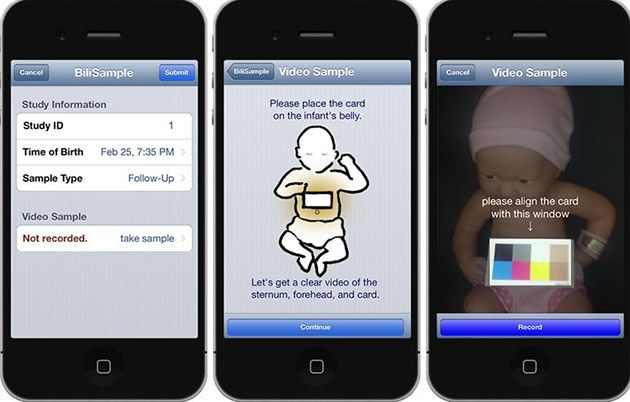 Currently the app is still in development, with the team planning to test it on 1,000 infants of different ethnicities, before pursuing the all-important FDA approval.

Apple believes its current push into mobile health, with devices like the eagerly-anticipated iWatch, is a “moral obligation.”

Number of comments on this postLeave a comment
Posted in: News Tagged: app, iPhone, University of Washington