SAN FRANCISCO — It’s every entrepreneur’s worst nightmare: The app you’ve spent hours developing gets shut down before it even really launches.

It’s been a rocky road for four young French entrepreneurs who hoped to make their mark with a parking app called Sweetch. Their idea was to alert prospective parkers that spots on the street were freeing up, exchanging a nominal fee between drivers that could be donated to local charities. But instead of paving the road to fame by clearing the city’s congested streets, they ended up pulling their app from the Apple store under threat of litigation from San Francisco’s City Attorney.

“We helped five or 10 people a day, we brought value to them, but the city didn’t even try to understand that,” co-founder Hamza Ouazzani Chahdi says, speaking to Cult of Mac in the sunny, immaculate and modern apartment the guys call both home and office in the city’s Mission District. “We were lumped in with the other apps that definitely had a predatory model and it was toxic for us.”

He says that despite a meeting with San Francisco officials, the entrepreneurs weren’t really give a chance: “It was just, ‘Here’s your deadline.’”

At a time when more than half of all U.S. venture capital is flooding into the San Francisco Bay Area, “fail early, fail often” is almost a rallying cry. With $7 billion floating around, pivoting when your first iteration doesn’t succeed has become about as common here as early morning fog.

The enterprising quartet behind Sweetch, who all lived in Paris before studying at the U.C. Berkeley Center for Entrepreneurship and Technology, have a new mission born out of a transportation misadventure.

“We were so busy coding Sweetch that we forgot about our car,” recalls Jardaneh. Their Ford Taurus got towed for resting five minutes over the limit in a commuter lane downtown. “I think it was Hamza’s fault. He was in charge of putting timer and either he forgot to do it or it didn’t beep. Either way, we lost an entire afternoon getting the car back.”

They saved the ticket as kind of a reverse trophy and while they were hacking away at Sweetch, kept the idea on the backseat.

They’ve now launched an app called Spot Angels that’s designed to keep drivers from getting towed. In a city that hauls off about 150 cars a day (around 60,000 a year), there would seem to be plenty of demand for such an app.

Alerting a driver before the tow truck hauls away their ride would save fines starting at $450 and a time-consuming trip across town to the impound lot at Pier 70. Towed cars are such a hot-button issue that a local politician floated the idea for a similar app last year.

The Sweetch guys tried to make Spot Angels simple to use, even in a city that’s enacted a baffling array of parking laws (usually spelled out on infuriatingly hard-to-read signs).

“There’s no hassle, you just check in and we make sense of all the crazy rules,” says co-founder Aboud Jardaneh, speaking in a living room dominated by a flat-screen television and an old-school edition of Battleship.

So, why wouldn’t you just take a picture of a nearby sign with your smartphone and remind yourself that way? The short answer: It takes something near divine intervention to parse street parking in San Francisco. One side of the street might come clean from 8 a.m. to 10 a.m. the first and third Wednesday of the month, for instance, while the opposite side is 10 a.m. to noon the first and third Tuesday. And then there’s the white zones, yellow curbs and the kind of easy to overlook rush-hour restrictions that nabbed the Sweetch guys’ Taurus. 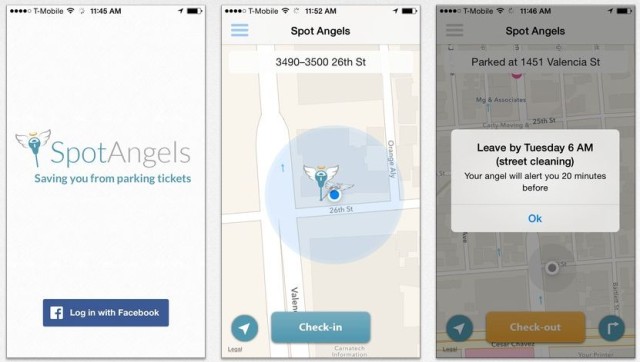 The Spot Angels app, available for free in iTunes, warns you 20 minutes before street cleaning and tow-away hours. After downloading the app and signing in with Facebook, you click just one “check in” button when you park. The clean, simple interface confirms the address (in our tests, it was much more accurate if you have Wi-Fi enabled) and a pop-up also tells you the exact day and in how many hours you’ll have to spirit your vehicle away.

The guys are making a go of it with some of the investment money left over from Sweetch “and a lot of sweat equity,” says Jardaneh. The app will continue to be free, then once a critical mass of people find it useful they’ll roll out paid features.

Of Apple’s two co-founders, the group unanimously responds that they admire Steve Jobs over Steve Wozniak.

“Everything we’re doing right now wouldn’t have been possible if you didn’t have a device like that in your hand,” says Jardaneh. For Thomas Cottin, it’s all about Jobs’ “passion for things well-done,” adding that since they are all engineers, they appreciate things they can’t do by nature – thinking about design and focusing on simplicity. They had a lot of time to think while working on the relaunch, some of it spent cruising the streets of the city.

One of Jardaneh’s favorite San Francisco drives is arriving at the Marina by way of the steep hills of Pacific Heights, where the ocean comes into view through rows of Victorian mansions.

“We did a lot of driving around when we were testing this app,” he says. “We’d pin ourselves and check out the data. It came in at about 97 percent accuracy, so we were super-happy.”