Selling a half-billion of anything is impressive, especially when you can do it in less than seven years. That’s exactly what Apple has managed to do with the iPhone.

Apple had sold 472 million iPhones in total at the end of 2013, and given analysts estimates of 38-42 million units sold this current quarter, the 500 million milestone has most certainly been reached.

As noted by Forbes, we won’t know for a fact that 500 million units have been sold until Apple’s Q2 2014 earnings come out next month. A record 51 million iPhones were sold during the last holiday quarter, and Apple has managed to sell more iPhones each year since the original model launched in 2007.

Here’s a chart, via CNBC, that shows the consistent rise in iPhone sales each year: 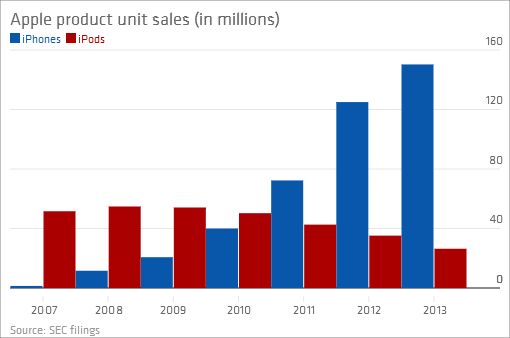 Naysayers like to point out that iPhone sales are not rising as quickly as they once were. The rapid growth of Android rivals like Samsung, combined with the relative plateau in iPhone sales, has some worried. There is something to be said for how saturated the smartphone market has become.

When asked about market-share woes during Apple’s last earnings call, Tim Cook said, “Our objective has always been to make the best, not the most. And I feel like we’re doing that.” It’s the same mantra Apple has always stuck to, and there are about 150 billion reasons to prove that it works.