I’m typing this review on the Filco Majestouch 2 Tenkeyless keyboard. It has blue Cherry MX switches, and a standard ISO layout with UK English markings. It is the best keyboard I’ve used, but despite that this won’t be a regular review – a million people have already written about this keyboard.

Instead, I’ll tell you what I like and then tell you how I made this Windows keyboard play well with my Mac. Warning: includes nerdy hacks.

The Filco Majestouch 2 comes in a bunch of physical configurations. There are regular and tenkeyless versions so you can lop off that number pad to save space and get the mouse closer to the keyboard.

There are ANSI and ISO layouts, which means U.S and The Rest Of The World. The ISO layout has a bigger, l-shaped return key and a half-width left shift key with the tilde (~) tucked in next to it.

You can also opt for a Ninja model, which puts the lettering on the front of the keys, leaving the tops black. It looks totally badass, but was out of stock when I ordered mine.

Finally, you can pick key switches. I opted for Cherry Blues, the clicky keys that give an audible and tactile click when they activate, around half way through their travel. These are regarded as best for typists. You can also get Red switches, for gamers (no clicks, softer action for easier pressing) and Brown, which are still “tactile” (aka. not too easy to press) but not clicky. I have tried brown switches in the past, and I prefer the Blues.

There are other Cherry switches, and other Filco keyboards, and you can read endlessly about them on the rest of the internet. What you won’t read in too many places is that you need to get used to this keyboard. It took me about two weeks to really get the hang of it after many years of short-travel keyboards, but now I am faster, more accurate and generally a lot louder. Stick with it, and you’ll eventually stop hating your new purchase.

The keyboard is insanely well put together. The clicky switches really let you know then you’ve typed a letter, and yet the keys are actually easier to press than some scissor-sprung keyboards (most notebook keyboards and Apple’s own aluminum keyboards use soft, short-travel switches).

The body is heavy, and this weight combined with the big rubber feet mean that the keyboard stays where you put it. It has some flip out legs, but you shouldn’t use these unless you hate your wrists and want to give yourself RSI.

Also, it sounds awesome. At first you’ll shy away from bashing at this keyboard, but after a while you’ll love it. Nothing says I AM WORKING better than the clackety-snap of Cherry Blues rattling into the the echoey corners of your office.

No special media keys, no USB ports on the keyboard, no proper command and option keys. But also – no problem: I fixed these up in software and with a pair of paperclips (well, not the USB hub part obviously). But that’s not why you bought this keyboard. You bought it to type on, and that’s what it excels at.

Fist, let’s switch those keys. Some Filco models ship with a keycap puller, but it’s easy to fashion your own. I took a pair of paperclips and bent them to make little grabber hooks, like so: 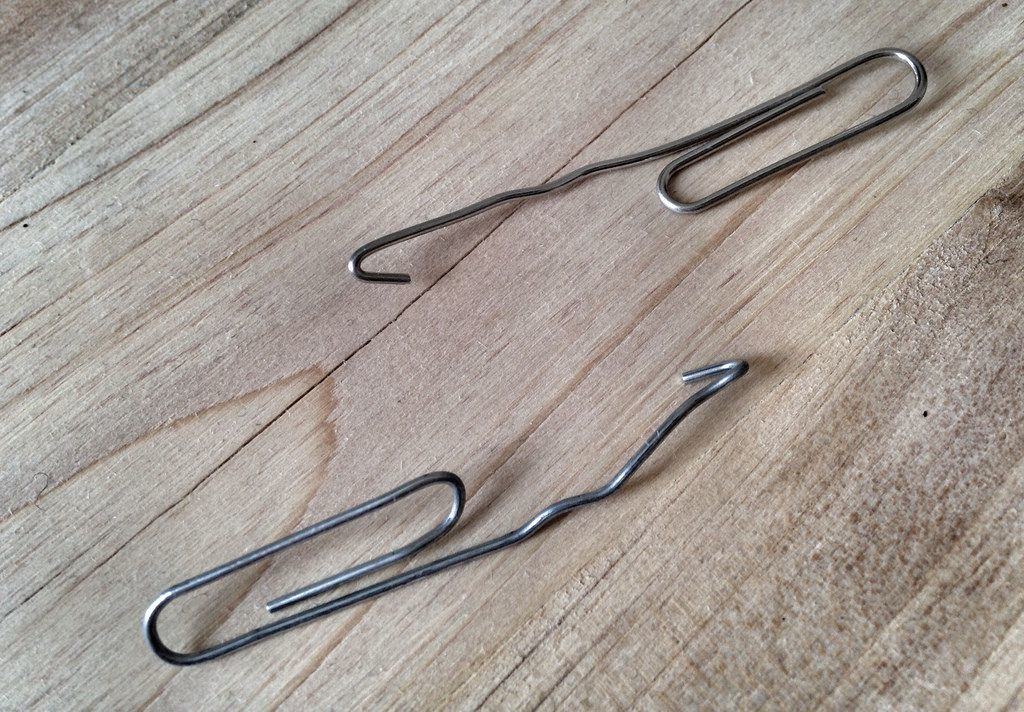 Hook these into diagonally opposite corners of the Alt and Windows keys and pull to remove. Then just swap them and push back into place. Now we have to switch them in software, to the ⌘ key is next to the spacebar as God intended. Fire up System Preferences, find the keyboard preference pane and choose the first tab, “Keyboard.” Click “Modifier Keys…” and change the settings thusly: 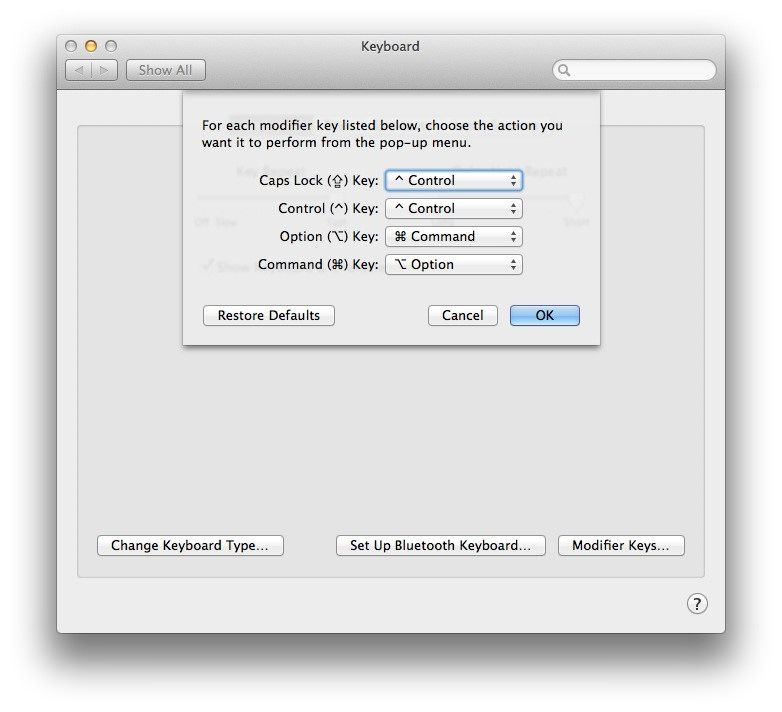 Now the keyboard behaves as it should, but you don’t have any way to control volume or even screen brightness. Previous versions of OS X let you switch the Function keys to be either regular F-keys or media controls. You can’t do that in Mavericks. We need another app.

It’s called KeyRemap4MacBook, and it works with any keyboard and any Mac, despite its name. It’s a utility and kernel extension which lets you change all kinds of keyboard functions on your Mac, including the function keys.

There are roughly one gazillion options, but the ones you want relate to the top row, which we’ll detail here. You can also change the behaviour of the weird little PC Application key down between the right Ctrl and Alt Gr (option) keys (search for “Change PC Application key” in the app). I changed mine to an Expose All key:

I also tweaked my Insert key to be another tab key, but I might switch back as it’s more annoying than useful.

Then you just look through until you see the options you like. Here are mine, gathered together using KeyRemap4MacBook’s handy “show enabled only” checkbox: 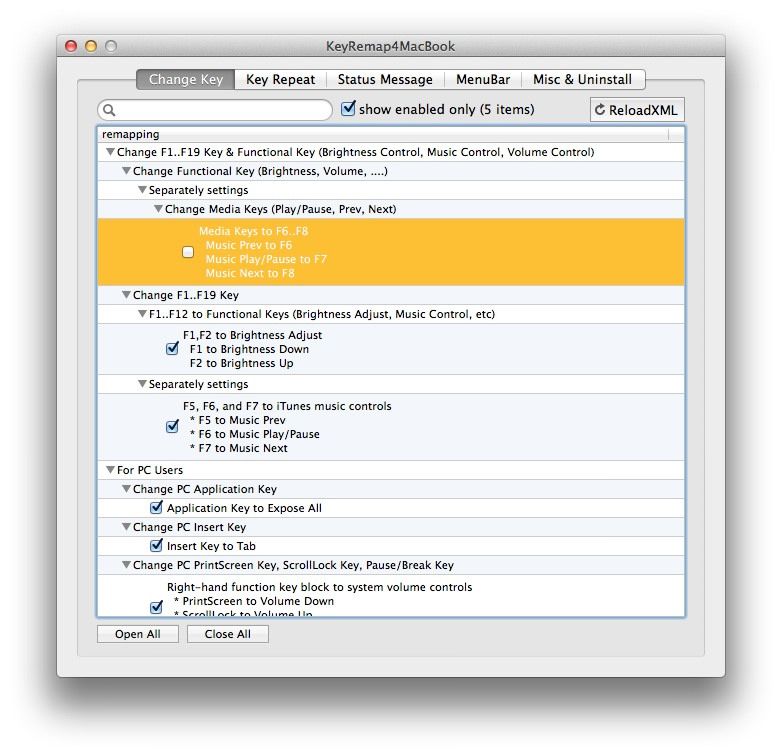 That is, brightness is on the first two keys, the media keys (play/ pause and skip) are on F5-F7 (the first three keys of the middle block), and the last three keys are used for volume and mute. I have them set like this as it’s easy to remember where they go. You could ad decals I guess, but I figure muscle memory can take care of it. After all, I still tap the Bluetooth switching keys on my Logitech K811 when I mean to adjust brightness.

The final step is to tune off the Caps Lock key, as you should on any keyboard.

With some easy software mods and a quick switch of the keycaps, the Majestouch 2 is a very capable Mac keyboard. I love mine. I really enjoy typing on it, and I like how it looks and sounds. It won’t work well with my iPad (although technically it should work via the camera connection kit), but it’s too big for that anyway. Best of all, it should last me forever, and spares are readily available should I need them.

Don’t fancy it? No problem. You can use my tips with any non-Apple keyboard. And if you have questions/comments, hit me up on Twitter.