When Apple announced a completely redesigned Mac Pro this past summer, the biggest question mark was the price tag. As a company that’s known for selling quality hardware at a premium, would Apple price the Mac Pro ultra-competitively or stick to its infamous ‘Apple tax’?

Well, the most expensive Mac Pro you can buy costs nearly 10K by itself. For normal people, that’s a hard price to swallow. But with two base configurations and plenty of build-to-order options, the real pros have no trouble dropping cash on Apple’s new powerhouse.

Here’s what a maxed out Mac Pro looks like: 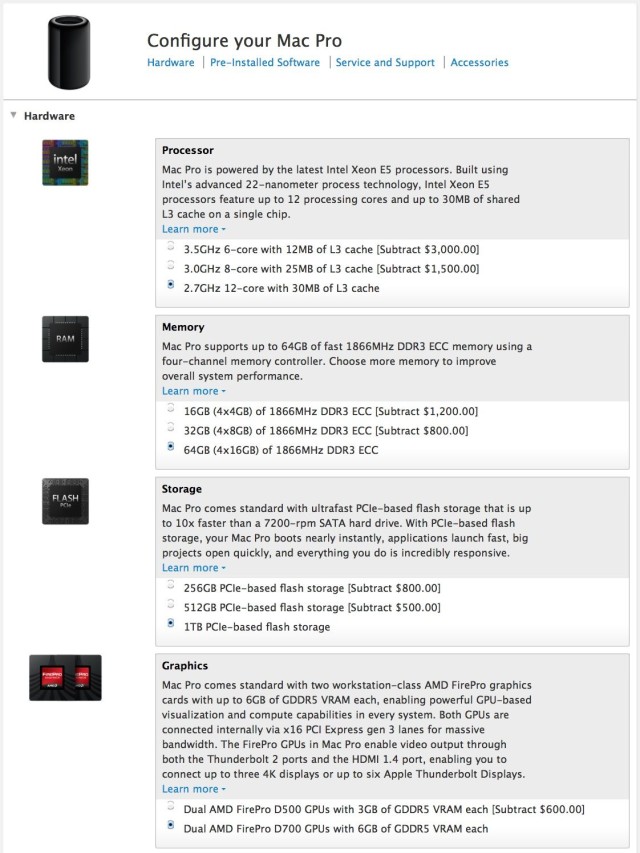 $9,599 after all is said and done. Not too shabby. Things start getting a lot more expensive when you add a 32-inch Sharp 4K display for $3,595, tools like Final Cut Pro, AppleCare, external Thunderbolt 2 storage, etc. We were able to get the final cost to around 15K in the Apple Store with every add on.

The CPU is by far the most expensive upgrade you can make. “Compared to the CPU, all the other upgrades are less outlandishly priced,” notes Ars Technica. “The SSD pricing is actually not too far removed from market rates, at least if you’re using 2.5-inch SATA drives as a point of comparison (it’s difficult to find PCI Express SSDs on component sites right now, and you can be sure that Apple is using a proprietary connector here, just as it does in all its other desktops and laptops). The RAM is also marked up, but depending on the amount you’re buying, it’s not too bad.”

When we asked one pro who does professional video production if he was buying a Mac Pro, he quickly said, “Yeah, I bought two!”