I’ve tested lots of leather wallet cases for the iPhone, but the Wall St from id America is a lot different to the rest.

It’s not a folding case like Twelve South’s iconic BookBook, but rather a sleeve that your iPhone slips into that has a large hole in its front for your display, and a little pocket in its back for your credit cards.

It’s an ideal alternative for those who like to keep things simple and don’t want to have to deal with flappy front covers when using their smartphone. It makes everything easy to get to, and it doesn’t cover up any buttons, ports, or speakers.

The Wall St fits both iPhone 5 and iPhone 5s (there’s another version for iPhone 5c, too), and it’s available in a number of pretty colors, including brown, blue, orange, and red. It costs $34.95, so let’s find out whether it’s worth it.

It’s an attractive case, and it feels incredibly well built. It’s comfortable to hold, and it’s smooth to the touch. On the inside of the case, there’s a soft suede lining that provides a snug fit, and protects your iPhone from scratches when you slide it in and out of the case.

It’s easy to get your iPhone into the Wall St, but not so easy to remove it. But that’s a good thing; there is nothing to secure it once it’s inside the case — the top is left completely wide open — and the last thing you want is for it to slip out when you take it out of your pocket upside down.

Once your iPhone is inside the Wall St, it’s relatively well protected. There’s a lip around its front edge that provides some protection for its display, so if you place it down on its face it won’t come into contact with the surface of your table.

There’s plenty of protection for its back and sides, too. The volume buttons are covered up, but they’re easy to feel and use, and there is enough room around the mute switch to operate it comfortably. You’ll also have no problems accessing the headphone jack and Lightning connector.

All four corners and the top edge of your iPhone are left exposed, however — more on this later.

The Wall St carries two cards quite comfortably (I recommend putting two in), and three at a push. Because it’s leather it will stretch, but I wouldn’t recommend forcing too many cards into it. The more you put in, the harder they are to pull out. You don’t want to be the clown at the front of the long line in Starbucks who can’t get their card out of their wallet.

There is a handy cutout in the center of the card holder that allows you to use your thumb to slide out your card. This actually works best if you put two cards in, because it makes the top card easier to remove. So I suggest putting a card you don’t use all that often in first, then your most frequently used one on top. 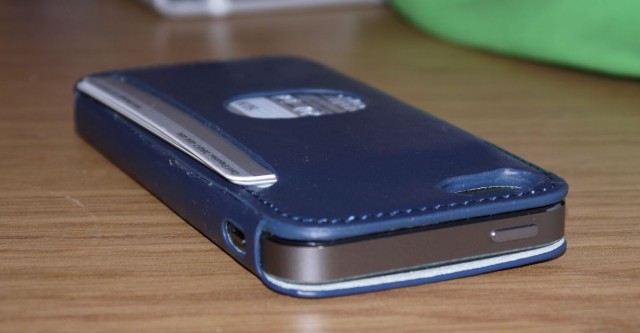 As I mentioned above, the Wall St does leave many areas of your iPhone exposed, including all four of its corners — and this is a problem. If you drop your iPhone, there’s a good chance one of it’s corners is going to hit the ground before any other surface does, and there’s nothing to stop them getting damaged.

I learned this the hard way.

I placed my iPhone on top of a radiator in my bathroom, forgot about it while I brushed my teeth, then pulled out the towel it was sat on without looking at what I was doing. The phone landed on a tiled floor, but it only fell just over two feet (26 inches), and it was inside the Wall St, so I wasn’t too concerned.

But when I picked my iPhone up, I noticed a nasty scuff on its bottom corner, which you can see below. 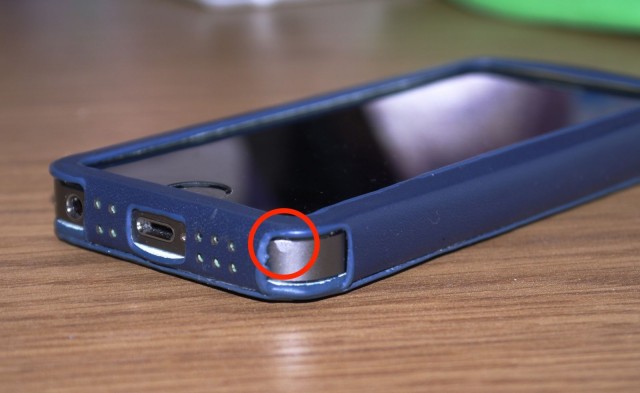 The Wall St also doesn’t leave enough space for your rear-facing camera. You can take pictures just fine — until you turn on the LED flash, which bounces off the edge of the camera cutout and right into your picture. The samples photos below show what I mean.

It doesn’t ruin the whole photo, and I very rarely use my iPhone’s flash. But if you do, it will become a problem for you.

There are lots of things I like about the Wall St, and I love that it tries to be different rather than just copying other successful wallet cases. I actually used it for over a week and couldn’t have been happier with it — I didn’t even mind that it got in the way of the LED flash because I liked it so much.

But after that drop, I’ve been looking at the Wall St in a different light.

I still really like this case, but the fact that it leaves your iPhone’s corners exposed — and that they’re such vulnerable areas — means you’ll need to think twice about investing $35 in it if you’re prone to dropping your iPhone. I still use the Wall St from time to time, but I’m very mindful about how I use it now.