The ClipR is a little disk that turns any headphones into a set of Bluetooth headphones. Or, to be more accurate, it turns any 3.5mm jack cable into a Bluetooth-enabled jack cable.

And it has a clip, so you can tuck that cable neatly away. 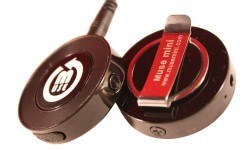 Imagine a poker chip, only instead of being a useless piece of plastic that you will lose in a bout five seconds of stepping onto a hideous, optic-nerve-jangling Las Vegas casino carpet, it’s actually a tiny NFC-enabled Bluetooth radio complete with eight-hour battery, a hole for your headphone/speaker jack and a bunch of buttons to control play/pause, volume and even call answering. And yes, there’s a noise-canceling mic in there too.

And there lies the problem with Bluetooth headphones in general. They’re pointless. I only use headphones when I’m out and about, which means I have my iPhone in my pocket. And running a cable from ear to hip isn’t really that inconvenient. But you know what is inconvenient? Finding somewhere to spool up the extra cable that’s still attached to my headphones. Or charging yet another device. Or having to put up with Bluetooth’s dropout problem and lower quality.

So I’ll save my $40. Maybe I’ll put it on the roulette table instead.