I used to keep three keyboards around the place, just to use with my two iPads and my iMac. This was clearly absurd, and I have since settled on the still-excellent Logitech K811, a Bluetooth keyboard which can easily switch between three Bluetooth devices at the touch of a button.

The Kanex Multi-Sync Keyboard offers a similar feature set, but is more geared towards the desktop. It’s pretty good, but won’t replace my K811. Let’s see why.

The Kanex Multi-Sync Keyboard is a full-sized chiclet-style keyboard with both a number pad and a bunch of iPad-specific keys. It can connect to up to three Bluetooth devices (each has it’s own dedicated key) and it also has a USB port so you can hook it up direct to a computer via cable. The Kanex runs off two AAA batteries, and also ships with a great little iPad stand.

The keyboard unit is light but sturdy, with an all-plastic construction. The USB connection is fantastic, letting you use it with a computer when the Bluetooth is broken (or not allowed), or just to plug into a set-top box for one-time setup. No longer do you need to keep a wired USB keyboard around just for emergencies. 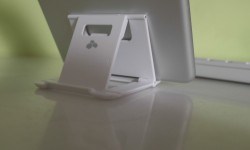 I also prefer a wired keyboard for my Mac as wakeup is instant, something that causes problems and delays with my K811.

The keys aren’t backlit, but this too can be a bonus, especially as I have to actually turn off the Logitech at night thanks to its habit of waking the hand-detecting backlight seemingly at random.

The number pad is of course handy if you need it, although you might find it gets in the way of your mouse, forcing your right hand too far off to the right to be comfortable. I got around this years ago by switching to my left hand for mousing, but I still find the number pad unwieldy unless inputting lots of numbers.

The other neat feature is the Mac and iPad-ready keys. You get the usual array of media keys along the top, including brightness (there are some advantages to having a longer keyboard), and at the bottom (front) corner on each side you’ll find a a giant search and home key. Combined with the new full-page multitasking previews in iOS 7, this double-tappable home key makes typing on the iPad pretty great

The plastic stand also deserves a mention. It’s much more than an afterthought – in fact, Kanex could sell it as a standalone product and do well. It’s has three sides which fold flat, or open out to make a triangular prop. The lit at the front holds the iPad in place, and the triangle can be adjusted to any of three angles. I find myself using it on its own, and its tiny footprint makes it perfect for small desktops.

Finally, switching between Bluetooth devices is fast, taking a few seconds for the target iPad or iPhone to realize it’s being spoken to and no more. This part is reliable enough to forget about (until you accidentally hit the USB button and switch off the Bluetooth connection that is).

The keys themselves aren’t nearly as nice as those on my Logitech, or even the Apple Wireless keyboard. They’re closer to the MacBook Air in feel, only slightly less clicky and positive than even that keyboard. That’s not to say the Kanex is mushy: it’s not. In fact, it’s a lot better than most chiclet keyboards I’ve tested. It only suffers when compared to the best two chiclet keyboards I have ever used.

Instead, the search key now just sends you to the first home screen, which is pretty useless. Hopefully Apple will do something about this in a future iOS update, because it affects all iPad keyboards, and manufacturers can;t do anything to fix existing models.

If you’re in the market for a switching keyboard, then this should be on your shortlist. The USB connection is a great bonus, as are the iPad-specific keys, and the fact that it uses readily-available AAA batteries is a boon to some. There are better-feeling keyboards out there, but if you’ve never used the Logitech you won’t have any complaints about the feel of this one.

Recommended, then, but with caveats. I’m sticking with my awesome little Logitech, but I don;t want to part with the little Kanex iPad stand.