You’ve got to admire a game that matches its own intent so perfectly that you suddenly can’t visualize how else the genre should be done. That’s certainly the case here with Zynga’s Solstice Arena. It’s currently my favorite MOBA game on any platform, which is great, since it plays well on both iOS and the Mac. I’m reviewing the Mac version here, but assume that–aside from touch controls–the game plays exactly the same on iOS. This is a good thing.

As a genre, the action real-time strategy (ARTS), or multiplayer online battle arena (MOBA), has a history reaching back to modified RTS game maps for Starcraft and Warcraft. Recently, League of Legends from Riot Games has taken on the mantle as the most well-known game of its type, moving into the lucrative world of eSports, as well.

Zynga may be more known for Farmville and other Facebook games, but the San Francisco games publisher has delivered a much more midcore game than I expected. Developer A Bit Lucky has created a streamlined, compelling take on the ARTS genre, and while the game may not surpass more traditional entries in the field, Solstice Arena still engages players of all levels without sacrificing too much of the strategic depth of the game type. 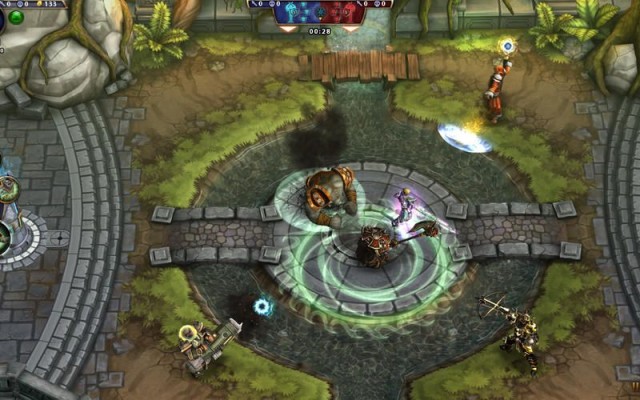 Game play is fairly straightforward: players choose a hero to enter into a three versus three battle, and then try to destroy the opposing team’s towers and main base. The teams move their heroes down the field toward the other goal, picking up power ups and cash in the form of a centrally-located treasure chest along the way. Heroes will clash in various areas of the map, usually the middle to start. Heroes have various types of powers, including melee and ranged attacks as well as healing or health-draining spells. When a hero dies, it re-spawns back in its own base. Players can purchase upgrades using in-game currency, which helps with movement speed, attack damage, and defense numbers.

The game has a delightful push and pull that’s common in many of the MOBAs I’ve played, without a lot of micromanagement needed. In League of Legends, for example, there are computer-controlled minions that regularly run down the lanes, attacking enemy towers and heroes, picking up cash for upgrades. Not so in Solstice Arena, which sticks with a fairly stripped down approach: three heroes only per team manage the fighting and tower attacking. Players can move forward and backward along the lanes of the map, playing a fun risk-reward balance game. Should I move forward and continue to attack the enemy with the low hit-points, hopefully killing them off and sending them back to the spawn point? Or do I run away, making sure I don’t run the risk of dying from a tower that might be too close, or another enemy hero I only see at the last minute. It’s forward, back, forward again in a satisfying dance. 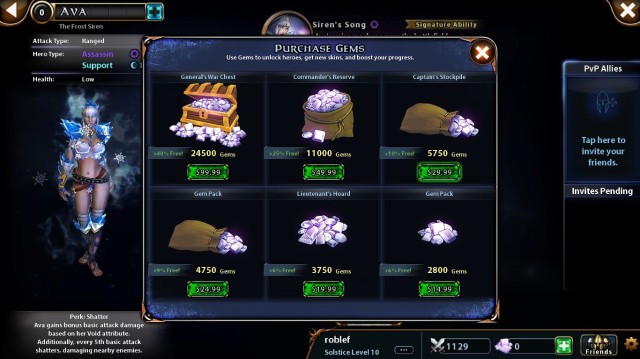 Solstice Arena has its share of in-app purchases, of course. There are two types of currency in addition to the in-game gold. One, gems, can only be purchased. The other, represented by crossed swords, is comparable to experience points: players earn this by competing in online battles. Both gems and crossed swords can be used to purchase new heroes, though you’ll need more experience points currency than gems to do so, a subtle bid to spend money to attain new heroes faster. Only gems can be used for premium hero skins as vanity purchases, however. Potions are purchased with crossed sword points.

Trying out new heroes is part of the joy of playing this type of game, and Solstice Arena allows for quite a few tryouts. To “own” a hero is nothing more than just playing enough to earn the right amount of experience points, and I “earned” the barbarian Hamhock character with only three online matches, thanks to a clever reward system given to new players of the game. 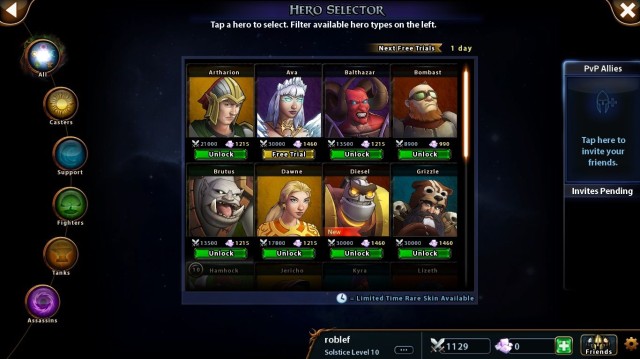 The rest of the fun here comes from the carefully balanced heroes moving back and forth across the map, destroying a tower in bits, killing off opposing heroes and taking advantage of the time they need to re-spawn, and working with two other players with whom you can’t talk to. Instead, players begin to respond to each other with movement on the map; there were plenty of times when I noticed my teammates waiting fore me to heal up, or following my lead on a advance or retreat move. There are a couple of emotes that can be used to say things like, “retreat” or “group up,” but I found them to be too much trouble to use.

Ultimately, whether gamers play Solstice Arena on their Mac (my preference) or their iOS device, they’ll be surprised by the fun they’re having with a Zynga game. The free-to-play cruft is fairly unobtrusive, and does allow some to attain more heroes faster with real money. I haven’t seen any instance, yet, of overly powered heroes ruining an otherwise well-balanced match. The game play is solid action real-time strategy without too much micromanagement needed, which is just perfect for a session or three between tasks on the Mac, or in longer sessions with friends.

I highly recommend Solstice Arena for anyone, especially those who’ve not been bitten yet by the MOBA bug; it’s a solid entry into the genre, and allows players to focus on the core mechanics of gameplay without having to learn or manage too much complexity.