Update:
After ripping it apart and posting in real time, iFixit finished the teardown of the gold iPhone 5s last night. The team there pulled it to pieces (carefully, gently) to find out just what makes it tick. They were able to see inside the A7 chip, can’t find the M7 chip, and were able to identify the maker of the iSight camera (Sony). All in all, some great stuff from the folks down under.

What they found isn’t too surprising, but it’s a ton of fun to read through the details, below.

Original Post:
The team over at venerable rip-into-gadgets site, iFixit, have gotten their hot little hands on a brand new iPhone 5s, and they’re tearing it down to let us all know what’s inside. If you’re into seeing the guts of Apple’s latest iPhone 5s, check out all the gory goodness below.

You can see the Touch ID sensor in one of the first images on the site, along with a warning that pulling too hard when separating the two sides of an iPhone 5s could rip the cable apart. Don’t do that.

The next step is the iSight camera: it came out fairly easily. The iFixit team says it’s consistent with the iPhone 5 and iPhone 4S camera manufacturing markings, which means this is probably a Sony part.

Next up is the logic board, on one side of which–after pushing and pulling and carefulness–the team was able to identify the various integrated circuit chips (ICs), including chips from SK Hynix, Qualcomm, Triquint, Apple, Broadcom, and Texas Instruments. The other side has the big hitters, like the A7 chip, below. 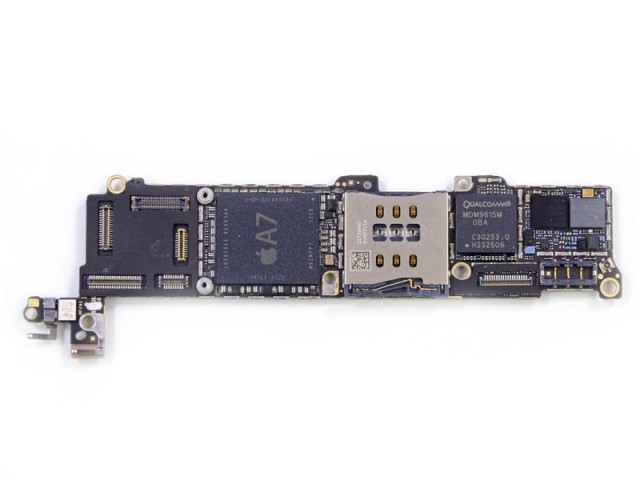 At the end of the process, here’s what the team at iFixit found:

What we do know:

What we don’t yet know:

• Who manufactured the A7. We need to decap the chip for that, which will take a bit more time.
• Who made the MEMS sensors that feed into the M7.
• What, or where, the fabled M7 is.