SAN FRANCISCO, CA — Top developers at an AltWWDC panel conference gathered to openly discuss Apple’s keynote announcements on iOS 7, Mac Pro, and Mac OS X. The overriding feeling from the main panel is that while many are happy about iOS changes, most are disappointed with the lack of focus on actual news of tools for developers.

Aaron Hillegass, the Chief Learning Officer and Founder of the Cocoa programming camp Big Nerd Ranch, was one of those let down by the Monday morning keynote. He told us the Jony Ive-led changes were “overdue” but were not for programmers. “I was disappointed. I felt that this was [supposed to be] a developer conference.” Instead, he says, “it was more about selling phones.” Hillegass appreciates that selling phones is an important component of maintaining a healthy application business, in particular to make people excited about the the platform, but feels there’s a lot more Apple could have brought to the table.

“It didn’t feel like they gave [developers] much to do.”

Another panelist said the Apple keynote failed to give developers a push to get back home and work on their apps immediately. “It didn’t feel like they gave [developers] much to do.” Instead, he said the keynote was 95% geared towards end users. 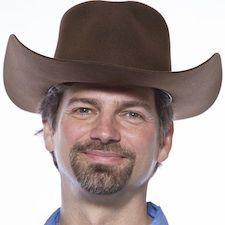 One of the main things Hillegass (right) and other developers said they were most looking forward to — and did not get — was the availability of free trials for all applications, as well as paid upgrades. As of today, most applications in iOS can’t offer a free trial to customers. A free trial has been a useful way for other mobile operating systems to offer users the ability to define an app’s worth and to lower its perceived cost.

AltWWDC is in its second year of gathering Apple developers to discuss tips and best practices and to bring about discussion of the platform, outside WWDC’s purview. This conference became a sorely needed option to the many who lost out on sold-out $1600 tickets for the main event.

A topic the panel seemed excited to talk about was the new application for in-car Siri functionality. The main iOS in the Car feature showcased Siri Digital Assistant integrated in cars that can read out messages and play music hands-free. The developers said this was a feature where Apple was creating a very good platform opportunity. They said a smart developer could create an innovative app through smart integration of the technology and the new user space. The iOS in the Car feature is expected to be integrated by car manufacturers in time for the 2014 models.

Another issue discussed by the panel was the improved handling of CPU memory by OS X Mavericks. Two of the panelists noted the improved memory management would allow them to think about that side of building process less than before. “We hope it’s one of those things where we can go kinda crazy and let the CPU figure out. The multi-task in iOS is very exciting.” The panelists agreed the new app notifications change will improve the speed and management of the important, always-changing updates.  They said it solves a lot of problems they’d been coding around and that “the idea that the app can be woken up in the background based on the user behavior” will make all apps more useful.

As for the highly hyped aesthetic design, Hillegass mentioned later on Twitter that he liked the redesign but there is “excessive use of translucence.” Others agreed with his assessment. To them, the aesthetic appearance of translucence gave windows the appearance of ‘wax paper.’ Hillegass later said that for him, “wax paper is the new Corinthian leather.” That’s not the best endorsement for innovation.

Another design cue discussed was the accelerometer parallaxing (the feature where you can see the background picture behind your apps, as in 3D). But the panel could not agree on whether it was a great, fun feature or a totally unnecessary one. Most of the developers said they looked forward to seeing the parallaxing, but another, Jalkut, said he though the parallax looked ‘kinda trashy to me. It looks like something from the Matrix. Looks kinda trashy to me, not simplistic.”